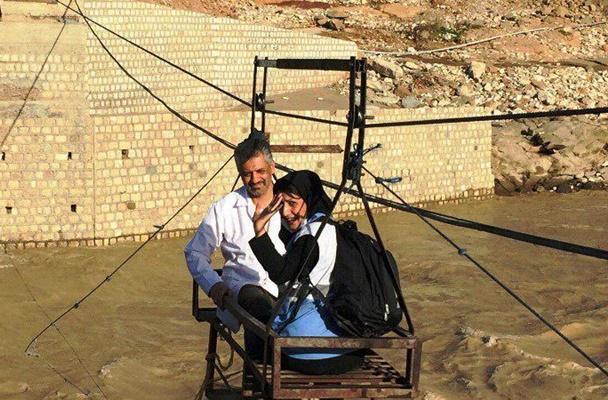 Golnar Lorestani Rad, an Iranian midwife who offered medical services to pregnant women in flood-hit areas, has been chosen as the top midwife of Iran.

Lorestani Rad from Pol-e Dokhtar County voluntarily rushed to the flood-hit areas to offer services to the provincial residents during the recent disaster.

From mid-March to April 2019, widespread flash floods hit large swaths of Iran, most severely in Golestan, Fars, Khuzestan, and Lorestan provinces. The country was hit by three major waves of rain and flooding over the course of two weeks which led to flooding in at least 26 of Iran’s 31 provinces. At least 76 people died across the country.

In an interview with IRNA on the occasion of the International Day of the Midwife (May 5), the brave Iranian woman elaborated on her efforts in the flood-hit areas which won her the title of the top midwife of Iran. Below, you can read an excerpt of the interview:

Birth of 50 Children amid Flood Ruins

Lorestani Rad who rushed to the flood-hit areas of Lorestan province since the early days of the flood, began her operation in the makeshift hospital of Islamic Revolution Guards Corps (IRGC) in Lorestan.

“I was also present in Sarpol-e Zahab when the region was hit by a heavy earthquake more than one and a half years ago. During the recent floods, I was also dispatched as part of a medical team to Pol-e Dokhtar to offer services to the quake-hit people there,” she said.

She went on to say that unfortunately, during the recent flood, many people lost their houses and properties so they didn’t have even the basic goods for serving food. “So they were in dire need of not only basic goods but spiritual support by other fellowmen.”

Lorestani Rad said she and her colleagues began a house-to-house search to find out pregnant women and offer medical services to them.

“We examined their physical conditions and offered them some health items. For example, during one day, we managed to examine 128 women and offer medical services to them,” she noted.

In addition to medical operations, Lorestani Rad also joined Pol-e Dokhtar’s mountaineering team to distribute food and medicines to people caught in relatively impassable areas. The team also trained pregnant women, the old and middle-aged women how to use the health and food items.

“We found some villages which had been cut off during the flood and used Gorgor and walked a long distance to reach them to distribute food and medicine among their residents,” she noted.

According to Lorestani Radi, thanks to the distribution of free food and medicine among the flood-affected people, the situation was controlled and there was no report on any problem for any pregnant woman in the areas.

“I never imagined that I’d begin to help a pregnant woman give birth in the ruins of flood,” she said.

The International Day of the Midwife was first marked on May 5, 1991. It has since been observed in over 50 nations around the world. The idea of having a day to recognize and honour midwives came out of the 1987 International Confederation of Midwives conference in the Netherlands. In 2014 it was celebrated in Iran and New Zealand among other places.

Midwifery is the health science and health profession that deals with pregnancy, childbirth, and the postpartum period (including care of the newborn), in addition to the sexual and reproductive health of women throughout their lives.