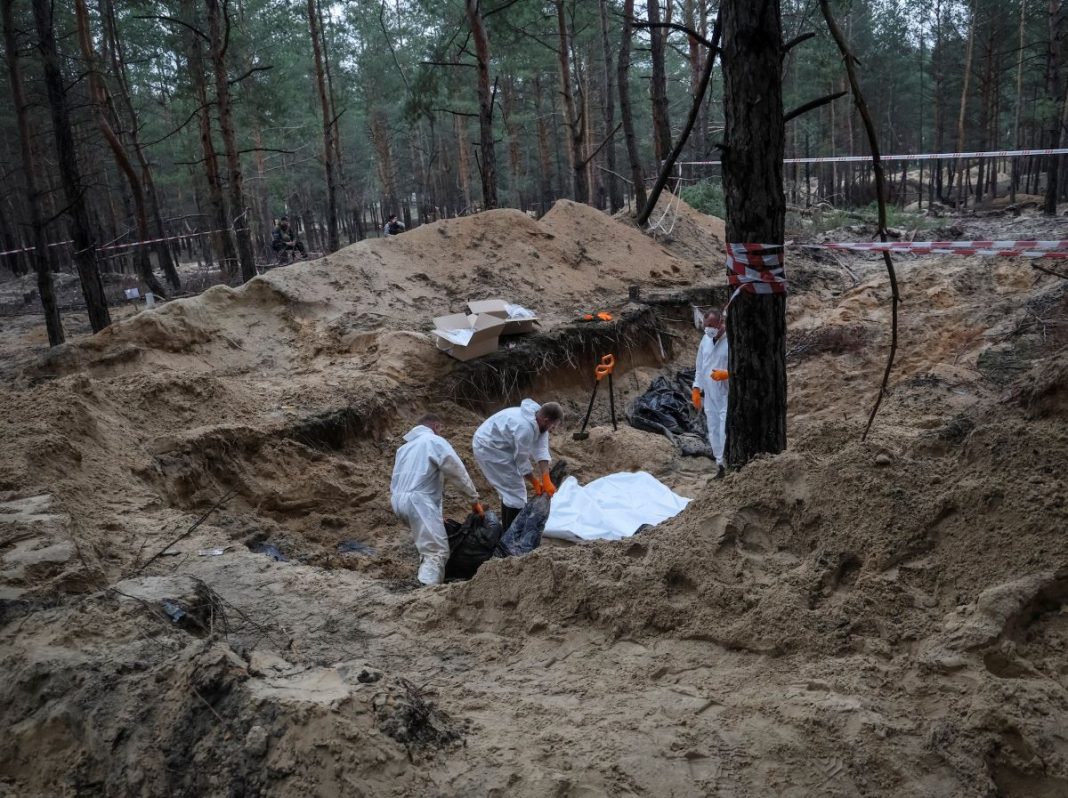 The Russian Army is offering nearly $2,700 a month as an incentive for civilians to fight in Ukraine.

Soldiers in camouflage and black masks showed their guns to interested passersby in the southern Russian city of Rostov and handed out colour brochures titled “Military service on a contract – the choice of a real man”.

The officer in charge said Russians and foreigners aged from 18 to 60 with at least a high school education would be eligible.

Moscow and Kyiv have accused each other of provoking fighting in Kherson, after a video showed clashes in the centre of the occupied Ukrainian city the previous evening.

Russian official media Vesti-Crimea broadcast a video showing an exchange of fire around two armoured vehicles near Kherson train station. The Moscow-installed administration of Kherson said later in the day it had “destroyed” a group of attackers.

“There was a clash in the centre of Kherson between sections of the Russian armed forces patrolling the streets of the city and an unidentified group of people,” the administration said on Telegram.

Prosecutors in an area of Ukraine where Russian forces recently retreated in the face of a Ukrainian counteroffensive are accusing Russia of torturing civilians in one village that was recently freed.

In an online statement, prosecutors in the Kharkiv region announced that they found a basement where Russian forces allegedly tortured prisoners in the village of Kozacha Lopan, near the border with Russia.

Russia has widened its attacks on civilian infrastructure in Ukraine in the past week and is likely to expand its target range further in “a move to undermine the morale of the Ukrainian government and people”, the UK’s defence ministry said in a brief.

“In the last seven days, Russia has increased its targeting of civilian infrastructure even where it probably perceives no immediate military effect,” it announced.

“As it faces setbacks on the front lines, Russia has likely extended the locations it is prepared to strike in an attempt to directly undermine the morale of the Ukrainian people and government,” it added.

A total of 165 ships with 3.7 million tonnes of agricultural products on board have left Ukraine under a deal brokered by the United Nations and Turkey to unblock Ukrainian sea ports, the Ukrainian infrastructure ministry said on Sunday.

The ministry announced in a statement 10 ships with 169,300 tonnes of agricultural products are due to leave Ukrainian Black Sea ports on Sunday.

“At 10:00 a.m., 8 ships left the ports of Great Odesa, and 2 more are waiting for their turn and favourable conditions,” the ministry added.

Ukraine’s grain exports slumped after Russia invaded the country on Feb. 24 and blockaded its Black Sea ports, driving up global food prices and prompting fears of shortages in Africa and the Middle East.

Ukraine, a global major grain producer and exporter, shipped up to 6 million tonnes of grain per month before the war.

Three Black Sea ports were reopened under a deal signed on July 22 by Moscow and Kyiv and the ministry has said these ports are able to load and send abroad 100-150 cargo ships per month.

Putin ‘failing on all of his military strategic objectives’: UK defence chief

President Vladimir Putin is “failing on all of his military strategic objectives”, the Chief of the Defence Staff has stated.

Admiral Sir Tony Radakin said the conflict is likely to “grind on for a long time”, despite recent successes by Ukrainian military forces.

Asked about the situation in Ukraine, he told the BBC’s Sunday With Laura Kuenssberg programme: “At the very outset, we said that this was a strategic error by President Putin and strategic errors lead to strategic consequences.”

“And in this instance, it’s strategic failure. Putin is failing on all of his military strategic objectives, he wanted to subjugate Ukraine, that’s not going to happen,” he continued, noting, “He wanted to take control of the capital, we saw that that was defeated earlier on. We saw that he wanted to weaken NATO. NATO is now much stronger, and we have Finland and Sweden joining.”

“He wants to break the international resolve. Well, actually that strengthened over this period, and he’s under pressure, his problems are mounting,” the military official stressed.

“He’s always had a problem in terms of crewing the equipment that he’s got. He hasn’t got sufficient manpower. His forces are thin on the ground. And we’re also seeing a magnificent Ukrainian armed forces who have been courageous, they’re fighting for their country, and they’ve embraced the international support that all of us are providing,” he stated.

President Volodymyr Zelensky accused Russia of committing war crimes in Ukraine’s northeast and said it was too early to say the tide of the war was turning despite rapid territorial gains by his forces this month.

The Ukrainian leader also told Reuters in an interview that the outcome of the war with Russia, now in its seventh month, hinged on the swift delivery of foreign weapons to his country.

He compared the situation in newly liberated areas of the northeast “to the bloody soap opera after Bucha”, a town near Kyiv where he accused Russian forces of committing numerous war crimes in the first phase of the war. Moscow denied the charges.

“As of today, there are 450 dead people, buried (in the northeastern Kharkiv region). But there are others, separate burials of many people. Tortured people. Entire families in certain territories,” Zelensky added.

Asked if there was evidence of war crimes, he stated, “All this is there… There is some evidence, and assessments are being conducted, Ukrainian and international, and this is very important for us, for the world to recognise this.”

Local media say four explosions were heard in the Russian-occupied Kherson region on Sunday, according to the Kyiv Independent.

“Local residents said that black smoke was rising from the territory of a machine-building plant where a Russian military base is allegedly located,” the Ukrainian independent media reported.

President Vladimir Putin has pledged to stay the course in his campaign against Ukraine, warning if counterattacks continue, a “more serious” military response will be unleashed.

He remained steadfast despite strong evidence that his forces incurred heavy losses in the counteroffensive this month.

The EU presidency has called for the establishment of an international tribunal for war crimes following the discovery of hundreds of bodies, some bearing signs of torture in the northeastern town of Izyum.

“In the 21st century, such attacks against the civilian population are unthinkable and abhorrent,” said Jan Lipavsky, foreign minister of the Czech Republic which holds the European Union’s rotating presidency.

“We must not overlook it. We stand for the punishment of all war criminals,” he added in a message on Twitter.

“I call for the speedy establishment of a special international tribunal that will prosecute the crime of aggression,” he continued.

Western sanctions are starting to hamper Russia’s ability to make advanced weaponry, chair of NATO’s Military Committee told Reuters, adding though that the Russian industry could still manufacture “a lot of ammunition”.

“We now see the first serious signs of that in terms of their ability to produce, for example, the replacement of cruise missiles and more advanced weaponry,” Rob Bauer said, noting that some of the components Russia needs for its weapon systems come from the Western industry.