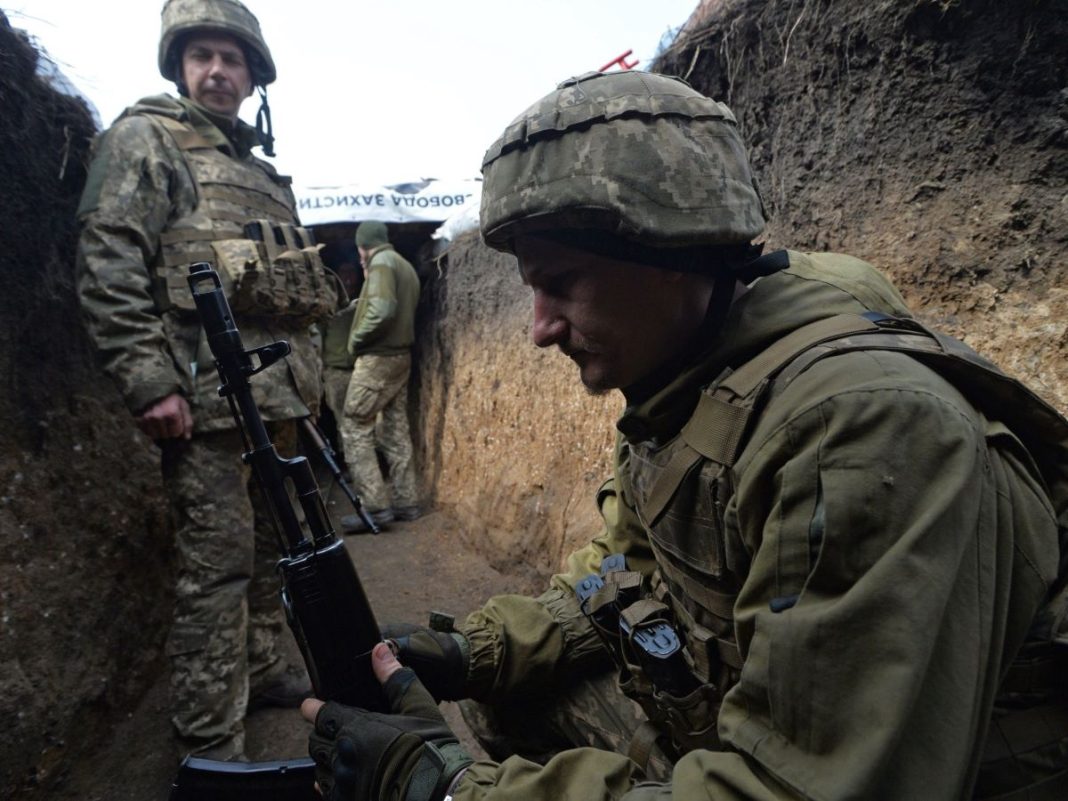 A new group of volunteers, who underwent training in the Chechnya-based university of special forces, left the Russian North Caucasus Republic and is headed to Ukraine, Chechen leader Ramzan Kadyrov wrote in his Telegram channel.

“Another group of volunteers departed to the Donbass special operation zone today from Grozny International Airport,” he said.

“Thanks to outstanding teaching staff of the Rusisan University of Special Forces, the volunteers are well-prepared for solving operational tasks promptly and skillfully,” he added.

UN-chartered ship in Ukraine readying for journey to Africa

The UN-chartered ship MV Brave Commander will depart Ukraine for Africa in the coming days after it finishes loading more than 23,000 metric tonnes of wheat in the Ukrainian port of Pivdennyi, a UN official said.

The ship, which arrived in the port near Odesa, will sail to Ethiopia via a grain corridor through the Black Sea brokered by the UN and Turkey in late July.

It will be the first humanitarian food aid cargo bound for Africa since Russia’s invasion of Ukraine on February 24 under the framework of the Black Sea Grain Initiative.

The cargo was funded with donations from the UN World Food Programme, US Agency for International Development and several private donors.

The first ship to depart Ukraine under a United Nations-brokered deal was approaching the Syrian port of Tartous on Sunday, two shipping sources have told Reuters news agency.

The Razoni set sail from Ukraine’s Odesa port on August 1 under the deal between Russia and Ukraine, brokered by the UN and Turkey.

The cargo had been headed for Lebanon, but the Ukrainian embassy announced the original buyer refused delivery of the 26,000 tonnes of corn and the ship then sailed to Turkey.

Russia’s priority over the past week has likely been to reorient units to strengthen its campaign in southern Ukraine, the British military intelligence has announced.

Russian-backed forces of the self-proclaimed people’s republics in the Donbas continued to attempt assaults to the north of Donetsk city, according to the intelligence update.

Heavy fighting has focused on the village of Pisky, near the Donetsk airport, the British Ministry of Defence said in its daily intelligence bulletin on Twitter.

It also added the Russian assault “likely” aims to secure the “M04 highway”, the main approach to Donetsk from the west.

German Finance Minister Christian Lindner has written to the European Commission seeking permission to waive value-added tax on a new gas price levy for a limited period of time, a copy of his letter seen by Reuters shows.

Germany’s gas market operator is set to announce on Monday the size of the levy, which Berlin is imposing on all gas consumers to spread the additional cost of gas imports.

The levy is aimed at helping Uniper and other importers cope with soaring prices due to reduced Russian export flows, but it would add to already sky-high energy prices and inflationary pressures for customers.

Lindner stated while he was asking on behalf of Germany, he was effectively asking for a VAT law change that would give all member states the temporary option to make similar moves.

The exiled mayor of the town where the plant is located, Dmytro Orlov, who evacuated to Kyiv-controlled territory in April, wrote on Telegram that local residents had informed him of renewed Russian shelling in the direction of the town’s industrial zone and the Zaporizhzhia nuclear plant on Saturday. It was not clear if any shells hit the grounds of the plant.

“According to witnesses, explosions can be heard again in the town,” Rogov said, adding that shells had landed in the vicinity of the power station, without specifying if it had hit the plant’s territory.

Ukraine and Russia have traded accusations over multiple recent incidents of shelling at Europe’s largest nuclear power plant, while the G7 group of nations have called on Moscow to withdraw its forces from the power station.

Ukrainian presidential adviser Mykhailo Podolyak accused Russia of “hitting the part of the nuclear power plant where the energy that powers the south of Ukraine is generated”.

“The goal is to disconnect us from the [plant] and blame the Ukrainian army for this,” Podolyak wrote on Twitter.

Ukraine has targeted Russian soldiers who shoot at Europe’s largest nuclear power station or use it as a base to shoot from.

“Every Russian soldier who either shoots at the plant, or shoots using the plant as cover, must understand that he becomes a special target for our intelligence agents, for our special services, for our army,” President Volodymyr Zelensky stated.

Zelensky, who did not give any details, repeated claims that Russia was using the plant as nuclear blackmail.

Ukrainian forces controlling the towns and cities on the opposite bank have come under intense bombardment from the Russian-held side.

Ukraine’s military command has announced that “fierce fighting” continued in Pisky, an eastern village which Russia had earlier in the day said it had full control over, Reuters reported.

“The occupiers are trying to break through the defense of our troops in the directions of Oleksandropol, Krasnohorivka, Avdiivka, Maryinka, and Pisky,” Ukraine’s general staff said in its nightly briefing note on Facebook.

The Netherlands has joined the UK-led training programme for the Ukrainian military.

“The Netherlands has joined the UK-led program of training servicemembers of the Ukrainian army. Dutch personnel will start their mission this August. The more well-trained fighters we have, the closer our victory,” the Ukrainian minister of defence, Oleksii Reznikov, wrote on Twitter.

“Thanks to Kajsa Ollongren for friendship and support,” he added.

In June, UK Prime Minister Boris Johnson announced the launch of a major training operation for Ukrainian forces. Johnson said that the UK could provide training for up to 10,000 Ukrainian service members every 120 days.

Russia preparing for a prolonged war in Ukraine: Institute for the Study of War

Russia is readying itself for a prolonged war in Ukraine, according to the Institute for the Study of War (ISW), a US-based think tank.

The Ukrainian Main Military Intelligence Directorate (GUR) reported that the Kremlin initiated the “industrial mobilisation” of the defence enterprises in early August, banning some employees and the entire leadership at the Russian state industrial conglomerate company Rostec from taking vacations.

The GUR added that the Military-Industrial Commission of the Russian Federation, chaired by Russian President Vladimir Putin, is preparing to change the state budget by early September to boost industrial spending by approximately $10bn to support war efforts.

Russians upset by prospect of travel ban should complain to Kremlin: FM

Ukraine has said that those dismayed by Volodymyr Zelenskyy‘s call to Western countries to ban Russian tourists should “direct their complaints to the Kremlin”.

This week, the Ukrainian president stated a worldwide travel ban against Russian citizens would be more effective than sanctions. Russia rejected Zelenskyy’s call for a travel ban on its citizens.

“Russians who are upset with the prospect of being banned from tourist travel to Europe can direct their complaints to the Kremlin and over 70 percent of their compatriots who support the war,” noted Ukraine’s foreign minister, Dmytro Kuleba.

“No one proposes to ban those few Russians who may need an asylum or humanitarian entry,” he added.

Earlier this week, Ukraine’s overseas creditors backed the country’s request for a two-year freeze on payments on almost $20bn in international bonds. The move will save Ukraine some $6bn on payments according to Prime Minister Denys Shmyhal.

Battered by Russia’s invasion, which started on February 24, Ukraine faces a 35-45 percent economic contraction in 2022 and a monthly fiscal shortfall of $5bn.

French President Emmanuel Macron on Saturday signed the official documents approving the applications of Finland and Sweden to become NATO members. While Macron once called the US-led military bloc “brain dead,” he has switched tack since Russia launched its military operation in Ukraine.

France’s parliament approved the enlargement proposal earlier this month, after the two Nordic nations applied to join the alliance in May. By petitioning the Western bloc for membership, both renounced their prior non-alignment, with Finland officially having been neutral since shortly after World War II and Sweden since the early 19th century.

“This sovereign choice of Finland and Sweden, two European partners, will make it possible to strengthen their security in the face of the current threat in their immediate neighborhood,” read a statement from the Elysee Palace cited by the news agency AFP, with the “threat” in question presumably referencing Russia.

While Moscow warned Sweden and Finland in May of “serious military and political consequences” should they go through with their bid for NATO membership, Kremlin spokesman Dmitry Peskov said that as Russia has no territorial disputes with either state, Moscow is relatively unperturbed by the prospect.

By contrast, Russia has for decades described the prospect of a NATO-aligned Ukraine as an unacceptable security threat, ultimately sending troops into the country partly in an effort to prevent this outcome. If Ukraine had joined the alliance, its territorial claim over Crimea – which voted to join the Russian Federation in 2014 – could have brought NATO into direct conflict with Russia.

All of NATO’s 30 members must ratify new additions to the alliance.