Rouhani Says His Gov’t Paying For Mistakes of Previous Administration 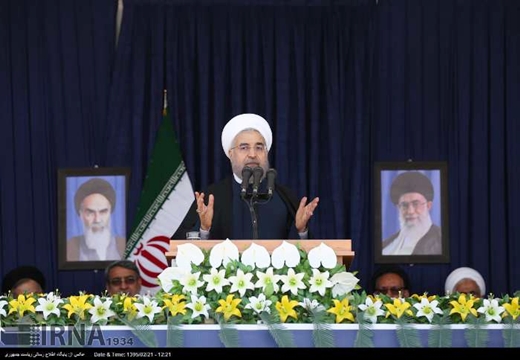 Criticizing certain economic decisions made during the time of former President Ahmadinejad, President Hassan Rouhani said his government is now paying for past mistakes.

Talking to a gathering of people in the southeastern city of Kerman on Tuesday May 10, he said that $2bn of national assets had been made available to the US due to poor policies.

He said the government was now being forced to pay for the [earlier] mistake, maintaining that there was a golden chance to get the money from the US during 2007-8. The question now remains to be answered as to why this didn’t occur, said the President, explaining that the committee assigned to investigate the case will produce its report soon.

The President said that Iran is going to take the case to the International Court of Justice (ICJ) to restore the rights of the Iranian nation through legal, banking and political channels, going on to say that the government will spare no effort in reclaiming the seized assets.

Referring to criticisms about the outcome of the Joint Comprehensive Plan of Action (JCPOA), he said that the deal gave Iran a free hand to carry out new activities. In the four months since the JCPOA implementation, the President stressed, a total value of $3.4bn of direct investment took place, while permissions have already been issued for another $3.5bn.

He said the nation has managed to get through a sensitive juncture in its history thanks to their unity and also the wise guidance of the Supreme Leader.

The President arrived in Kerman on Tuesday to pay his 27th visit to the country’s provinces.