Baghali Polo is an Iranian dish in which rice (Polo) is mixed with fava beans, baghali, and dill. This tasty mixed rice could be either served with fried chicken or meat. Baghali Polo is usually served at important feasts. 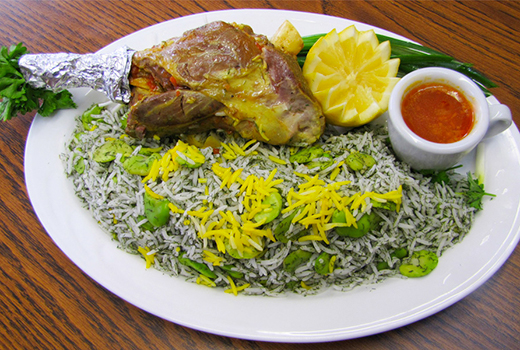 3. 400 grams fresh fava beans –After they are removed from pods, they should be peeled and cut in half.

5. Two large onions –which are peeled and finely chopped.

How to cook Baghali Polo

1. Rinse the rice with lukewarm water a few times, then soak it for a few hours in water to which four tablespoons of salt has been added. Bring some water to a boil in a pot and then add some salt to it. Put the fava beans into the pot and let them boil for about five minutes, until they turn tender. Drain the salt water from the rice and add the rice to the pot. Leave the rice in the boiling water with the fava beans until it is al dente. The rice should be neither too hard nor too soft; it should be firm and slightly chewy. Avoid overcooking the rice. Strain the rice and the fava beans in a colander and then rinse them with water to let them cool off.

3.Drizzle oil into a pot over a medium heat, so that a thin layer of oil covers the bottom surface of it. When the oil gets hot, turn down the flame and place the round slices of potatoes at the bottom of the pot.