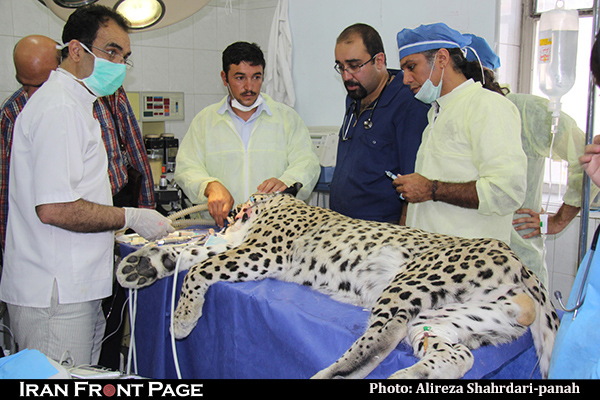 In an operation, unprecedented in the country, Iranian doctors put gold crowns over the damaged teeth of a leopard.

Persian leopards are the largest ones of their kind in the world. They have a big, muscular, and extremely flexible body and can be found in several habitats across Iran.

Rica, a male Persian leopard whose mother was killed by poachers in northern Iran when he was still a cub, was looked after by the rangers and then was first taken to Darabad Museum and later to Tehran Zoological Garden.

Rica went through a lot of pain because of worn lower fangs, tooth infection and abscess. The infection left a cavity in his lower jaw and caused him a lot of pain. Had it not been treated, it could have put his life in danger.

Unfortunately, in our country there is no veterinary dentist, that’s why wildlife expert Iman Memarian at Tehran Zoo tried to put together a team and use a dentist to treat Rica. He wanted to save the leopard in his care from the pain by any means possible.

Sizing up all factors at play to form a team, he asked Dr. Molazem and Dr. Omidvari, a dentist, and the School of Veterinary to help him with the exclusive treatment project. 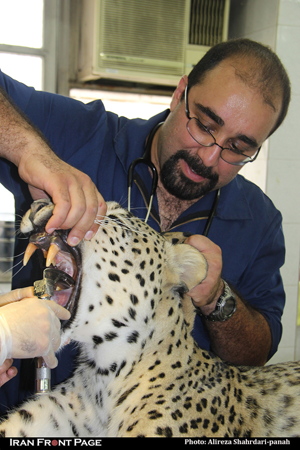 At Tehran Zoo, Rica was given a general anesthetic by Dr. Memarian who then took the animal to hospital in his own car because there was no ambulance available. What made what he did dangerous was that the animal could come to on the way to hospital. You never know how an aggressive animal like a leopard would react in the enclosed space of a car and what danger it could pose to people. Perhaps that was one of the reasons why his consciousness level was closely monitored by Dr. Ghazalleh.

Eventually, they arrived at the hospital and the unprecedented operation began. Although it was his first experience with animals, Dr. Omidvari along with the medical team performed the multi-step surgery confidently. At the first stage they removed the infected tooth pulp and the nerve.

In the second stage of the procedure, the root canal was carried out. Gold crowns were later made to be put over the top of damaged fangs.

What was interesting was that when Rica came around, he wouldn’t let anyone touch him even from behind the fence – something that he used to do – fearing that zoo keepers might once again want to use a blowpipe [a weapon which is used by inserting projectile inside the pipe, and the force created by one’s breath is used to give the projectile momentum in order to give an animal anesthetic drugs.]

Naarengi [Tangerine], a magazine which is aimed at children and their parents and published by Valeh Education Institute, first reported this story.

Alireza Shahrdari-Panah, who filed this report for Naarengi, served as an assistant to Dr. Memarian all through the process.