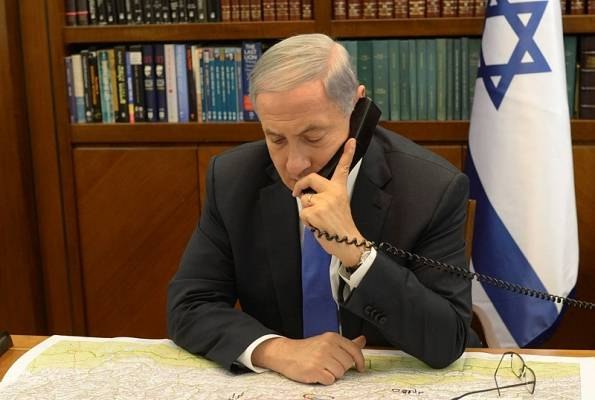 Israeli Prime Minister Benjamin Netanyahu has scrambled to make sure US President Trump wouldn’t meet Iranian Foreign Minister Mohammad Javad Zarif while he was making his way to France for a surprise visit at the G7 summit on Sunday, US and Israeli officials say.

A report by Axios has revealed that Netanyahu frantically tried to get Trump on the phone — who was in back-to-back meetings and couldn’t take the call — while his office contacted multiple senior Trump administration officials, trying to connect the two leaders.

The Israelis were worried that Trump — who loves making a deal and relishes the drama of an unconventional meeting — would let French President Emmanuel Macron talk him into holding an unscheduled meeting with Zarif.

The Israelis feared that a Zarif meeting could have made Trump more likely to call for a meeting with Iranian President Hassan Rouhani — leading to a showy summit and a long, open-ended diplomatic process that would take the pressure off of Iran.

Trump has made it clear he’s willing to meet with the Iranians without preconditions, but his administration recently sanctioned Zarif and US officials said a meeting with him would have been highly inappropriate.

Macron threw a curveball at the Americans — irritating some senior Trump administration officials — by inviting Zarif to Biarritz. And Trump, who usually sees little downside in meeting with foreign adversaries, appeared open enough to the idea that Israeli officials worried he might upend his carefully-planned schedule to meet with Zarif, the report by Axios said.

Netanyahu’s urgent attempts to get Trump on the phone showed the deep nervousness in Israel about possible renewed talks between the US and Iran.

Netanyahu saw Trump’s withdrawal from the Iran nuclear deal as a signature foreign policy achievement — and one that remains essential to Israel’s security. Any loosening of Trump’s “maximum pressure” campaign on Iran could create tension with America’s closest ally in the Middle East.

Last Friday, Macron met with Zarif in Paris. On Saturday evening, the leaders of the G7 discussed the Iranian issue over dinner, and Macron briefed the other leaders, including Trump, on his talks with Zarif.

Macron invited Zarif to Biarritz for more meetings on the sidelines of the G7 summit.

As Macron later explained at a press conference, his ultimate goal is to broker a meeting between Trump and Rouhani.

US officials could not say how close Trump was to agreeing to a meeting with Zarif. Macron said at his press conference with Trump on Monday that he wanted to arrange a meeting between Zarif and a US cabinet secretary.

US Secretary of State Mike Pompeo wasn’t present at the G7 summit, but Treasury Secretary Steven Mnuchin was there with Trump. Trump said on Monday that he told Macron he didn’t think the timing was right for a meeting with Zarif at the G7, but that he was open to meeting Rouhani another time.

US officials said Trump decided not to meet Zarif regardless of Netanyahu’s messages, and they told the Israelis of Trump’s decision on Sunday. They said when Trump finished his G7 meetings that day, administration officials asked the Israelis if they wanted to connect the call with Netanyahu, but there was no need because Trump had already decided not to hold the meeting.

Senior Israeli officials said that although Trump didn’t meet Zarif, they think direct talks between the US and Iran are just a matter of time – and not a lot of time.

The Israeli officials said they are concerned that a meeting between Trump and Rouhani could take place as soon as the UN general assembly opens in New York at the end of September.