MPs Meet FM Zarif to Hail His Return to Work 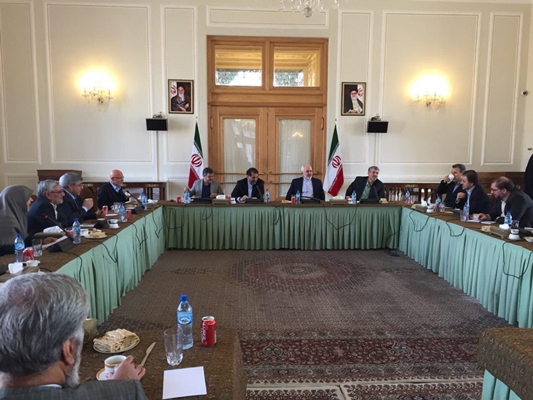 A group of lawmakers representing the Iranian Parliament's Hope Faction have visited the Foreign Ministry building in downtown Tehran to meet with the country's top diplomat Mohammad Javad Zarif.

During the Saturday meeting, the parliamentarians praised the foreign minister for his services and welcomed his return to work following his Monday resignation.

They also highlighted the significance of the country’s foreign policy and the key role played by the foreign ministry.

In the friendly meeting, Zarif also responded to questions raised by certain lawmakers.

“I consider accepting your resignation against the country’s interests and therefore, refuse to accept,” Rouhani told Zarif, who had unexpectedly announced his resignation via Instagram on Monday night.

Rouhani further highlighted the expressions of happiness by the “sworn enemies” of Iran, such as the Israeli regime, over Zarif’s intention to step down, which he said serve as the “best evidence” of the top diplomat’s success in performing his duties and the “main reason” why he should stay in office.