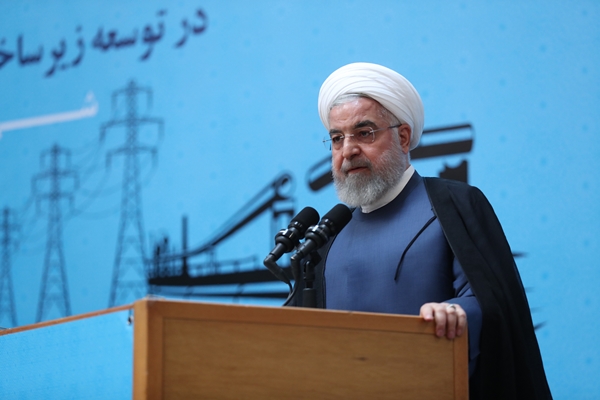 Iranian President Hassan Rouhani has suggested that he would meet even his American counterpart Donald Trump if such talks would secure Iran's interests.

Addressing a ceremony in Tehran on Monday, Rouhani said the government would use any means to resolve the country problems under the current circumstances.

“If I know my country’s problem will be resolved if I meet someone at a meeting, I’d definitely do it, because the country’s national interests come first,” rouhani said.

He referred to the US’ maximum pressure campaign and harsh sanctions against Iran, and said, “While we resist the sanctions, we also reciprocate, reduce the level of our commitments, but we also seize the chance for negotiation and diplomacy.”

The president said the Iranian people want dignity and independence while having welfare and less difficulties.

“We resist and stand up to achieve our goals, security, and greatness. Standing up is worth it only if our interests are secured,” he added.

“While we will stand up for our security and interests relentlessly, we will also hold negotiation to settle the problems.”

He said the “hand of power and hand of diplomacy must be joined together”.

“Those who think only one hand is enough are wrong. We should both use our military power and cultural and economic might; we should tap into both political and diplomatic power,” he went on to say.

His comments came one day after Foreign Minister Mohammad Javad Zarif paid a short visit to Biarritz, France, where the leaders of seven industrial countries were meeting.

There, he held talks with several European delegations, but not the American team or President Trump.

Zarif had earlier rejected an offer to meet with Trump in Washington DC a few weeks ago when he was in the US for a UN annual meeting. After that, Trump put him in the US’ sanctions list.