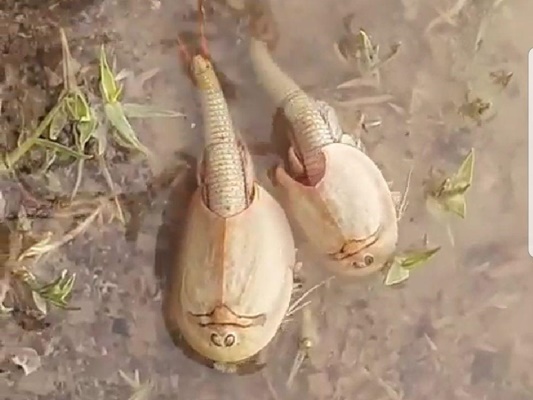 After nearly two decades of drought in Sistan and Baluchestan province in southeastern Iran, with the beginning of rainy season in neighbouring Afghanistan, flood waters have filled some parts of Hamoun international lagoon, and that has resulted in the revival of livestock and plant species in the wetlands.

An official from the provincial Department of Environment says one of the species of animals that is seen after the release of water into the imperiled wetlands on the hillside of Khawaja Mountain is the aquatic called Triops Cancriformis which is known in the world as “Living Fossil.”

Vahid Pourmardan added that this creature is a form of Crustaceans living in lake type waters of the world. He further noted that this species has been classified as in danger of extinction in the United States and Europe. “This species is considered to be one of the oldest living species on the planet at around 200 to 300 million years old. Due to its similarity to toads it is sometimes called tadpole shrimp. So far about 10 species of Triops have been found in the world, and the presence of this live fossil is promising for the next year in the province and Hamoun wetlands.”

The size of this species is usually up to 6 centimetres and is reported to be up to 11 centimetres in normal conditions. Due to its high tolerance in hard environmental conditions, including extreme temperatures, acidity of soil texture and long droughts, it has been able to form cysts to continue to survive under mud and freshwater beds. In the event of the provision of bio-nutritional conditions, it will resume its growth stages within two weeks and continue for up to 90 days.

Although members of the genus Triops usually have no economic importance, some variants of them has been used to control mosquitoes and weeds.