IRGC Showcases Wreckage of US Drone It Downed in June 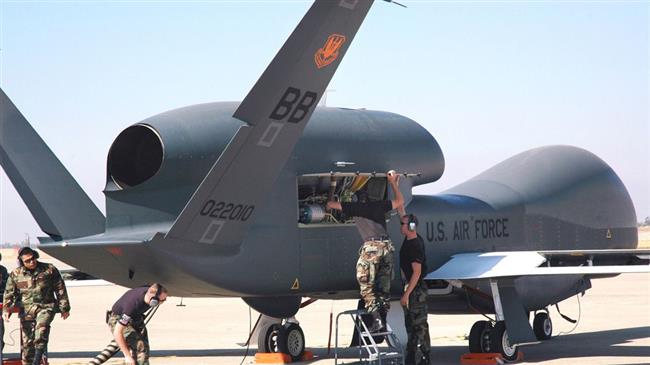 The Islamic Revolution Guards Corps (IRGC) has unveiled, for the first time, the wreckage of a highly-advanced American surveillance aircraft that the elite Iranian defense forces shot down last June for violating the Iranian airspace in the country’s south.

Two videos displaying the wreckage were published by the Islamic Republic of Iran Broadcasting on Thursday, several months after the drone was fished out of Iran’s territorial waters in the country’s Ra’as al-Shir area.

Meanwhile, commander of the IRGC’s Aerospace Division Brigadier General Amirali Hajizadeh, who visited the exhibit, told reporters that the US-operated MQ-4 drones have no efficiency against Iran anymore, because the country’s military forces have gotten their hands on all frequencies and codes of this aircraft.

“This aircraft is unique in that it can fly in very high altitude and go anywhere without affecting routine flight routes. For example, it can directly fly from the United States to the Persian Gulf,” he said.

The commander added that the MQ-4 drone is equipped with all kinds of espionage hardware because of its very big size, including all kinds of sensors, cameras and SAR radars, in addition to a supercomputer.

In a statement issued on June 20, 2019, the IRGC said its Air Force had brought down the US-made RQ-4A Global Hawk using its indigenously-manufactured Khordad-3 air defense system. The IRGC said the aircraft was targeted near the Kouh-e Mobarak region — which sits in the central district of Jask County in Hormozgan Province — after violating Iran’s skies.

According to the statement, the aircraft had flown from one of the American bases in the southern parts of the Persian Gulf region at 00:14 a.m. local time, with its identification transponders turned off in breach of all international aviation rules.

The drone was stealthily flying from the Strait of Hormuz towards Iran’s port city of Chabahar, and intruded into the national airspace while returning towards the west of the Strait, the statement said. While in Iranian skies, the aircraft began gathering intelligence and spying, it added.

The RQ-4 Global Hawk surveillance aircraft can fly at high altitudes for more than 30 hours, gathering near-real-time, high-resolution imagery of large areas of land in all types of weather, maker Northrop Grumman says on its website.

The IRGC also captured a US ScanEagle drone over the Persian Gulf waters upon its intrusion into the Iranian airspace in December 2012.

Iran’s air defenses also captured a US RQ-170 Sentinel drone in December 2011, which was flying over the Iranian city of Kashmar, near the Afghan border. Iran later reverse-engineered the aircraft’s hardware and software to copy its technology.