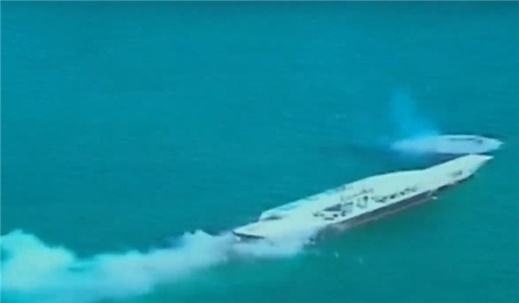 The IRGC missiles destroyed a mock aircraft carrier during the Great Prophet 9 war games in the Persian Gulf and the Strait of Hormuz.

A mock aircraft carrier was destroyed by the Islamic Revolution Guards Corps missiles during the IRGC Navy’s massive The Great Prophet 9 war games in the Persian Gulf and the Strait of Hormuz on Wednesday.

The model was built in real size and came under attack and was destroyed by missiles and rockets fired from tens of IRGC speedboats.

Also a number of the IRGC cruise and two ballistic missiles were fired at the mock US aircraft carrier.

Also during the drills, a mobile naval target was destroyed by Fateh 110 and Zelzal missiles on a deserted island 270km away from the war games zone.

The IRGC also fired its high precision capability missiles at a carrier during the naval exercise.

During the first moments of the second stage of the drills, enemy drones were also hit and destroyed by shoulder-launched Misaq missiles and artilleries mounted on 100 IRGC’s speedboats.

Speaking with reporters on the sidelines of the war games, IRGC Navy Commander Rear Admiral Ali Fadavi announced that the Ghadir cruise missile with a range of 300km will be delivered to the IRGC Navy in the war games.

“Our missiles will reach the Southernmost regional waters and we can hit mobile targets from offshore waters to the North of the Persian Gulf,” he added.

The IRGC Navy started massive war games, codenamed The Great Prophet 9, in the Persian Gulf and the Strait of Hormuz on Wednesday.

Different IRGC Navy vessels are being used in the exercises staged in the Persian Gulf and the Strait of Hormuz.

Tens of IRGC vessels started high-speed mine-laying operations in a short period of time to get ready for critical situations in times of possible threats.

Fadavi described Iran’s “mine-laying” capability as “the most important concern of the Americans”, and said, “We have the most advanced sea mines which cannot be imagined by the Americans.”

Iran’s naval power has even been acknowledged by foes. In a Sep. 11, 2008 report, the Washington Institute for the Near East Policy said that in the two decades since the Iraqi imposed war on Iran, the Islamic Republic has excelled in naval capabilities and is able to wage unique asymmetric warfare against larger naval forces.

According to the report, Iran’s Navy has been transformed into a highly motivated, well-equipped, and well-financed force and is effectively in control of the world’s oil lifeline, the Strait of Hormuz.

Since November 2008, the Iranian Navy has also conducted anti-piracy missions in the Gulf of Aden and Bab el-Mendeb Strait to protect the country’s cargo ships and oil tankers against pirates.