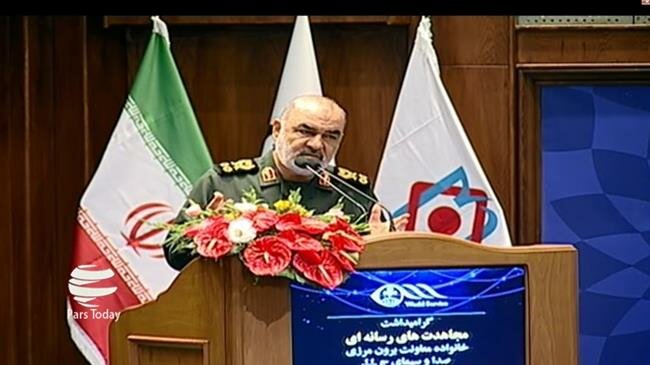 The chief commander of the Islamic Revolution Guards Corps (IRGC) says the enemy is retreating in a sign of victory for revolution.

“The enemy is retreating and leaving the ground while the Islamic Revolution is advancing. This is a sign for victory,” Major General Hossein Salami said at a conference on the role of media in Tehran Sunday.

The enemy, he added, possesses a “spider net” of media that “seems sophisticated but is actually very flimsy.”

“The enemies tell lies and commit oppression, but whoever other than you would transmit to the world the voices of the oppressed Palestinian and Yemeni children from beneath the rubbles?” Salami told representatives of the Iranian media.

The media could echo the voices of the oppressed, he said, noting that although the media war is “unequal,” those telling the truth will emerge the winner.

“The physical power is not important. The philosophy behind the power is what needs to be recognized. Look at the American philosophy; it is elegant outwardly but it is totally oppressive in concept and content,” he said.

“Today, they themselves confess that they have reached the point where the more they advance, the more they go downwards. Lack of strategy is the beginning of a gradual death and this is what has happened in the US.”

However, Salami said, the Iranian media’s philosophy is “defending the oppressed and putting ourselves in trouble to save the lives of others. This philosophy will definitely emerge victorious.”

The event also featured honoring Press TV news anchor Marzieh Hashemi, who was jailed in the US without charge for two weeks in January and later freed amid a public outcry.

He stressed that the enemy’s policies in the region have reached a deadlock and that the United States is in decline.