Iraqi Diplomat in Tehran ahead of Iran President’s Iraq Visit 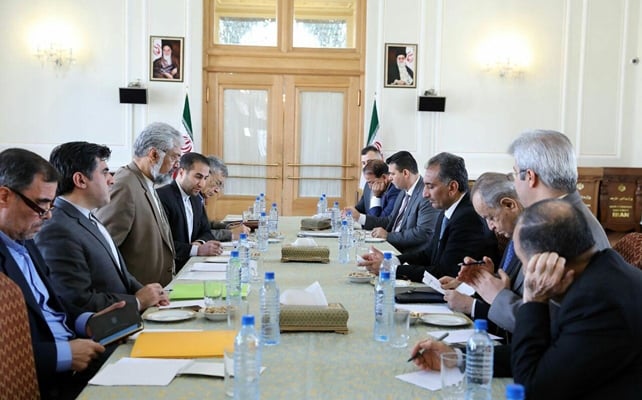 Ahead of the historic visit of Iranian President Hassan Rouhani to Iraq, the Arab country’s Deputy Foreign Minister for Political Affairs, Nizar al-Khairallah, has held talks with his Iranian counterpart Morteza Sarmadi in Tehran.

During the Wednesday meeting, the two sides reviewed various issues of bilateral relations and emphasised the importance of the Iranian president’s visit to Baghdad as a historic opportunity to deepen and broaden relations.

At the meeting, the Iraqi official invited his counterpart to visit Baghdad, announcing that there is no limitation in ties between the two countries and nations of Iran and Iraq in all fields, especially security and defence issues, and energy.

He also vowed that the Islamic Republic of Iran will play a key role in the Arab country’s reconstruction.

Khairallah and Sarmadi also exchanged views on border issues between the two countries in Arvand Rud, with the Iranian side touching upon the need for precise and complete implementation of the provisions of the 1975 Algiers Agreement.

As of March 10, Rouhani will start his first-ever official visit to Iraq as the Iranian president.

Earlier, Iranian Foreign Minister Mohammad Javad Zarif, his deputy Abbas Araqchi and head of Iran’s Central Bank Abdolnasser Hemmati had made separate trips to the Arab country to prepare the grounds for the visit.