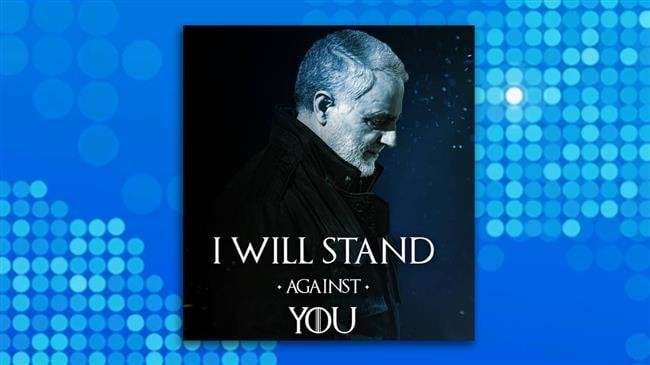 Iran’s Major General Qassem Soleimani has fired back at US President Donald Trump’s use of a meme imitated from popular American drama series "Game of Thrones" with one of his own, vowing to “stand against” American sanctions.

The commander of the Quds Force of Iran’s Islamic Revolution Guards Corps (IRGC) posted on Friday an Instagram photo inspired by the book series-turned-HBO hit show, which reads, “I will stand against you” in the show’s signature font, as used in Trump’s tweet earlier in the day threatening Tehran with more sanctions.

The photo was widely viewed as a direct response to the US president’s own Westeros-inspired tweet that read, “Sanctions are coming November 5.”

The post came shortly after the Trump administration announced plans to reinstate the last set of sanctions lifted on Iran under the 2015 Iran nuclear deal early next week. Trump announced in May that he was withdrawing the US from the International agreement.

The US-based cable network HBO also slammed Trump for his use of the show’s slogan – ‘Winter is coming’ – to promote his administration’s foreign policy agenda, saying it would prefer the American president not “misappropriate” their trademark.

“We were not aware of this messaging and would prefer our trademark not be misappropriated for political purposes,” said an HBO spokeswoman.

The network further took to Twitter – Trump’s favorite communication channel — and asked how to say “trademark misuse” in Dothraki, one of the show’s fictional languages.

On Saturday, Leader of the Islamic Revolution Ayatollah Seyyed Ali Khamenei responded to persisting US political and economic hostilities against Iran for the past 40 years, insisting that the United States has always been defeated in its face-off with the Islamic Republic.

Speaking in a public address a day after the Trump administration decided to re-impose all US sanctions against Iran lifted under the 2015 agreement, the Leader said, “For 40 years, the challenge between America and Iran has continued and a variety of movements have taken place from the enemy’s side – from the military and economic warfare to the media war launched by America.

“The goal of the United States in all this was to regain the domination it had in the era of the tyranny, but it could not,” the Leader added, referring to the period prior to the Islamic Revolution when the Shah of Iran was the top US ally in the region.

Iran’s foreign ministry has accused Washington of seeking to wage an extensive “psychological war” against Tehran by imposing a new round of sanctions, insisting that such US measures are not worthy of much concern.

“There is no room for any concern. We should wait and see that the US will not be able to carry out any measure against the great and brave Iranian nation,” Iran’s Foreign Ministry Spokesman Bahram Qassemi said on Friday. “It seems that the US has no more capability to put countries and global economic enterprises under pressure.”

The US plans to impose a second round of sanctions against Iran on Sunday, months after Washington scrapped the 2015 multilateral deal, officially known as the Joint Comprehensive Plan of Action (JCPOA), reached between Iran and the P5+1 group of countries.

The first round of the bans – which had been lifted under the nuclear deal — was re-imposed in August.

The Iranian general has previously reacted to other anti-Iran threats by the American president, warning Trump back in June against insulting the Iranian nation and president.

“Trump! You must not threaten our nation and must not insult our president… You must know what you are talking about; ask your predecessors and try to benefit from their experiences,” said General Soleimani on July 26.

Further pointing to Trump’s threat of waging military action against Iran, Soleimani insisted: “You know that this war would mean annihilation of all your assets. You may initiate the war, but it is us who will finish it off.”