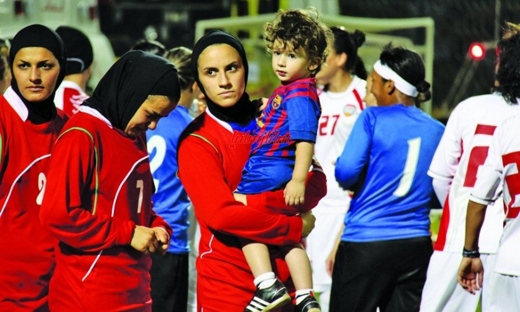 Niloufar Ardalan, the captain of Iran's women futsal team, has managed to legally defy the travel ban her husband had imposed on her and attend the 2015 Women's Futsal World Tournament in Guatemala.

Niloufar Ardalan, the captain of Iran’s national team who has stirred a controversy in recent months, has finally left Iran for Guatemala to take part in the 2015 Women’s Futsal World Tournament.

Ardalan, who had problems with her husband and as a result missed the final of the Asian Championship in Malaysia in September [in which Iran ended up winners], left the country without winning her husband’s consent. She left the country after she secured the approval of the Iranian Football Federation and a number of oversight bodies.

Mizan Online News Agency has released a report on the departure of the female Iranian futsal player, who is known locally as “Lady Goal”, for Guatemala despite her husband’s opposition. The following is the translation of the report:

The controversy broke out when the husband of Niloufar Ardalan, 30, refused to allow her to leave the country, citing her responsibility to take care of their only child.

In reaction, Ardalan turned to Football Federation officials and managed to accompany the country’s women squad on its trip to Guatemala where the 2015 Women’s Futsal World Tournament will be held on November 24-29.

While in Mexico in the national futsal team camp, Niloufar Ardalan said that she has left the country with the prosecutor’s permission.

“My presence in the national futsal team camp happened because of the prosecutor’s permission and I have a single exit permit” on my passport, Ardalan told http://90tv.ir/, adding that her departure [this time around] has nothing to do with her previous difficulties to leave Iran.

Iran has been drawn in Group A along with Brazil, Costa Rica and Portugal. Group B consists of Guatemala, Japan, Russia and Spain.]