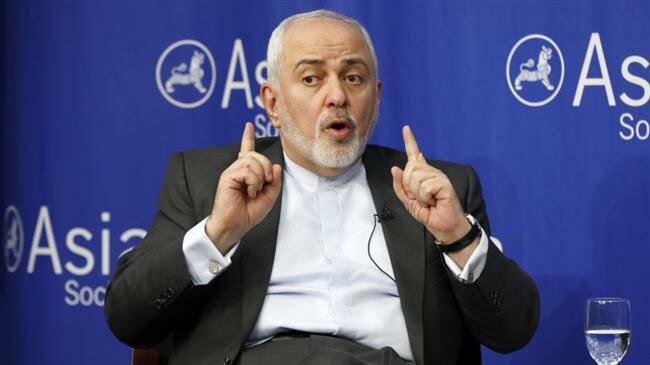 Iranian Foreign Minister Mohammad Javad Zarif dismisses the likelihood of a war between Iran and the United States but says certain "accidents" might ignite a military confrontation.

In a recent interview with the British online newspaper Independent at Iran’s Permanent Mission to the United Nations in New York, Zarif said although he did not think a war between Iran and the US was imminent, “accidents can happen” that then spiral into a “military conflict.”

In response to a question about the nature of such accidents, Zarif gave the example of a recent move by US President Donald Trump to put Iran’s Islamic Revolution Guards Corps (IRGC) on its blacklist of foreign “terrorist” organizations.

A lack of “vital communication” between the IRGC forces and ships going through the Persian Gulf and the Strait of Hormuz, a strategic waterway where most of the world’s oil exporters pass through, can easily lead to conflict.

The United States in April officially registered the IRGC as a “foreign terrorist organization,” according to a notice published on the website of the US Federal Register.

In a statement, the Iranian top security council said the designation came as a “reciprocal measure” against US President Trump’s “illegal and unwise” move to blacklist the IRGC as a foreign terrorist organization.

In a meeting with IRGC personnel and their family members in the capital Tehran, Leader of the Islamic Revolution Ayatollah Seyyed Ali Khamenei said the recent US decision is rooted in America’s “rancor” against the force, which has been in the forefront of the fight against enemies.

“The IRGC is the vanguard both on the field confronting the enemy on [Iranian] borders and even several thousand kilometers away [in Syria] as well as on the political battleground against the enemy,” the Leader said, adding that Americans hold a grudge against the force for that reason.

Also in his interview, the top Iranian diplomat mentioned an incident happened in the Persian Gulf in January 2016 when the IRGC naval forces arrested 10 US sailors after their patrol boats entered Iran’s territorial waters.

Zarif said that “a direct line of communication” between him and his US counterpart at the time John Kerry let the two top diplomats control the situation and secure the quick release of American sailors, adding that no such communication channel exists today.

“So a similar incident in the Persian Gulf could quickly get out of hand,” he said.

On January 13, 2016, the IRGC announced that ten US Marines, who had drifted into the country’s territorial waters in the Persian Gulf and had been taken into Iranian custody, had been released after Americans apologized for the incident.

When asked about Zarif’s interview with Fox News, the Iranian foreign minister said he wanted to reach out to Trump’s base in American mainstream “because it is important to speak to the other side sometimes”.

However, he noted that it was not his first interview with Fox and that he had talked to the channel years ago when he was Iran’s ambassador at the United Nations in New York.

In the interview with “FOX NEWS SUNDAY”, the top Iranian diplomat said all measures adopted by the administration of President Trump in dealing with Iran conveyed a message that “the United States is not reliable.”