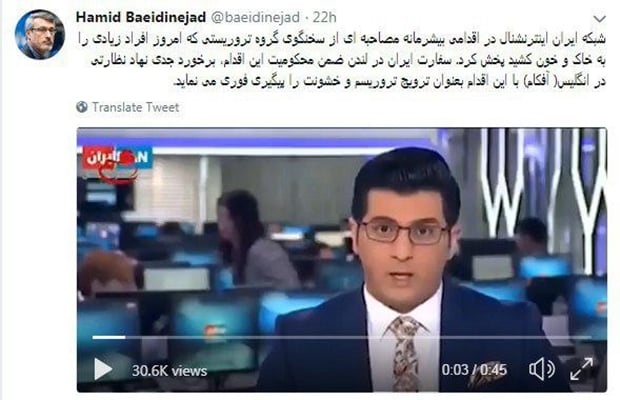 Iran has vowed to hold the London-based “Iran International” satellite channel accountable for “promoting terrorism and violence”, after the channel aired an interview with the spokesman of the terrorist group behind Saturday attack in south-western Iran.

“In a shameless move, the Iran International channel aired an interview by the spokesman for the terrorist group which slaughtered a lot of people today,” Iran’s Ambassador to London Hamid Baeidinejad tweeted on Saturday.

“Iran’s embassy in London condemns this and will immediately seek a serious response by the UK’s communications regulator Ofcom to the move which promotes terrorism and violence,” he said.

Four gunmen opened fire on civilians and military personnel near a military parade commemorating the beginning of the Sacred Defence Week, marking the start of the Iraqi dictator Saddam Hussein’s war in 1980.

The separatist group Al-Ahwazieh claimed responsibility for the terrorist attack, which left at least 25 dead and over 60 injured.

All the assailants were shot dead following the attack.

Shortly afterwards, the TV channel responded to Baeidinejad’s tweet, saying the interview was carried out after Iranian media blamed the group for the attack.

“Our goal was to fulfil our professional responsibility and have the official reaction of the group and the channel’s anchor challenged the spokesman on this move,” he said.

The network’s response met with criticism from Baeidinejad, who vowed to make every effort to hold the channel accountable for the illegal move.

“So you were fully aware when you had this shameless interview with the representative of the terrorist group and gave them an opportunity to justify their brutal behaviour,” he said.

In reaction to the move by the London-based channel, Iran even summoned the British interim charge d’affaires to protest at the unacceptable move.

“The interim British chargé d’affaires in Tehran was summoned in the absence of this country’s ambassador, and it was stressed to him that in the eyes of the Islamic Republic of Iran, it is not acceptable, whatsoever, for the spokesperson of the al-Ahwazi terrorist group to be allowed to claim responsibility for this terrorist act via a London-based TV network,” Foreign Ministry Spokesman Bahram Qassemi said.

Iranian President Hassan Rouhani has ordered the country’s security forces to use all their power to identify and punish those behind the deadly attack.

Leader of Iran’s Islamic Revolution Ayatollah Seyyed Ali Khamenei said the US puppet states in the region were behind the attacks.