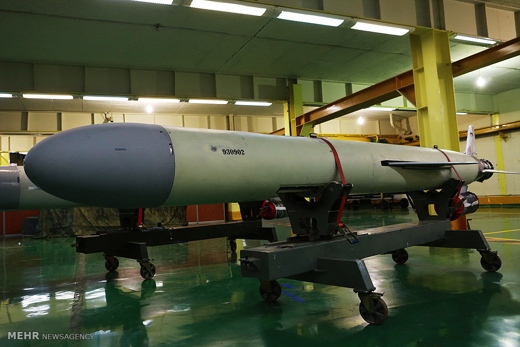 The cruise missile is better in terms of range and pinpoint accuracy in comparison with previous products.

A new domestically-manufactured land-based cruise missile named ‘Soumar’ has been unveiled and delivered to IRGC Aerospace Force along with long-range land-to-land ballistic missiles.

During the event, Dehghan said Soumar had been designed and produced by Iranian experts at the Aerospace Industries Organization (AIO), adding it “enjoys different characteristics in terms of range and pinpoint accuracy in comparison with the previous products.”

Dehghan also maintained that such significant achievements are “considered as crucial steps toward increasing the country’s defense and deterrence might.”

Dehghan also announced that the long-range ballistic missiles of Qadr and Qiam have been delivered to the Aerospace Division of the Islamic Revolution Guard Corps (IRGC). “These missiles have the ability to destroy a variety of targets under any circumstances due to their high tactical abilities, long endurance in the battlefield and stealth,” he said.

Iran has repeatedly assured other countries that its military might poses no threat to other states, insisting that the country’s defense doctrine is entirely based on deterrence.