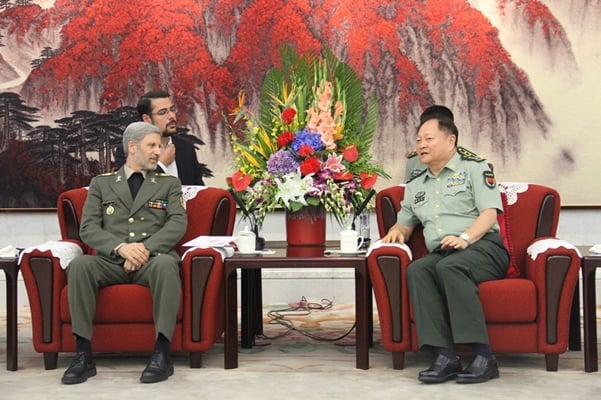 Iran’s Defence Minister Brigadier General Amir Hatami has thanked China for joining hands with Iran to support the Syrian government, saying Beijing’s cooperation has been highly effective in forcing a defeat to terrorists operating in the country.

“China’s assistance in supporting the Syrian government in the international arena was quite effective and the result is that terrorists are near their final defeat,” Hatami said in a meeting with China’s Vice Chairman of Central Military Commission General Zhang Youxia, the second-in-command of China’s armed forces.

Hatami said the Syrian people and their friends, including Iran and Russia, have managed to curb terrorism, which in recent years had intensified a crisis situation in West Asia.

“Terrorist groups had managed to bring about 90 percent of Syria under their control, but the Syrian nation, government and armed forces and their friends including Iran, Russia and Hezbollah entered the scene and reversed the trend,” IRNA quoted him as saying.

The seven-year crisis in Syria is moving towards an end as the Syrian government is restoring its control over large parts of the country.

General Hatami said the US is fuelling chaos in the international arena to advance its short-sighted agenda, without taking into account the interests of other players.

Pointing to the US trade war against China, its withdrawal from the 2015 nuclear accord and its pullout from the Paris climate agreement, Hatami said the US is disrupting order across the globe and this is to the detriment of the globe.

Washington has in recent months imposed increased tariffs on billions of dollars of imports from China, which has been reciprocated by Beijing.

Analysts have suggested the tit-for-tat confrontation could develop into the biggest trade war in history.

In the Saturday meeting, the Iranian and Chinese generals also discussed cooperation to promote peace and security across the globe and stressed the need for closer military collaboration between the two countries.

General Hatami entered Beijing Thursday night to hold another round of high-level talks between the two governments, which have been strengthening military ties in recent years.

In the meeting, the Chinese defence minister said Beijing is ready to actively develop cooperation between the armed forces of China and Iran.

Iran and China signed an agreement to boost defence and military cooperation in Tehran in November 2016.