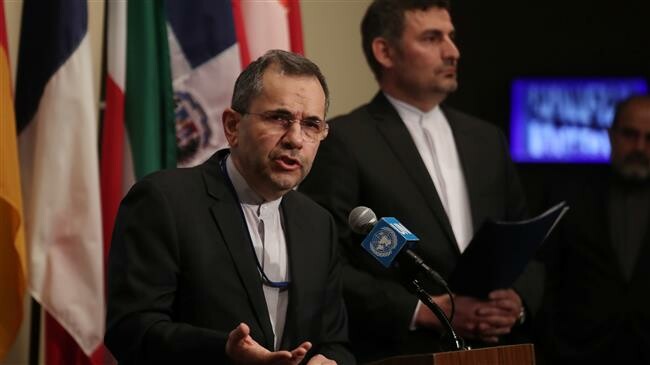 “The US’s decision today to impose more sanctions against Iran is another indication that American does not attach any respect to the international laws and the prevailing international opinion,” Majid Takht-e Ravanchi said at the world body’s headquarters in New York on Monday.

Earlier in the day, US President Donald Trump announced the measures against the office of Leader of the Islamic Revolution Ayatollah Seyyed Ali Khamenei, Iran’s foreign minister, and senior commanders of the Islamic Revolution Guards Corps (IRGC), the country’s elite defense force. Trump said the measures would deny the Leader’s office and other Iranian officials access to financial instruments.

“We will continue to increase pressure on Tehran, until the regime abandons its dangerous activities” Trump alleged

No dialogue under pressure

The US under Trump has been demanding that Iran act “like a normal nation” — a reference to the countries that submit to Washington’s regional and international dictates.

America has been applying immense pressure on the Islamic Republic to that end.

The pressure has seen the US leaving a multilateral nuclear accord with Iran, which is officially known as the Joint Comprehensive Plan of Action (JCPOA). Washington has also returned the sanctions that had been lifted on the back of the deal, and embarked on significant military buildup in the Middle East region.

At the same time as it incessantly ramps up the pressure, the US repeatedly voices a self-proclaimed intention to reengage in negotiation with the Islamic Republic.

Iran underlines that negotiation under the current circumstances translates into its giving in to the humiliation that the US is trying to impose on it. The country reminds that it was not the side to leave bilateral talks, demanding that Washington return to the negotiation table it once left, but only after relieving its undue pressure.

Takht-e Ravanchi likewise said conditions were not ripe for a dialogue with the United States, and that Iran would not accept such dialogue while it is under the threat of sanctions.

The United States must stop “its economic warfare and terrorism against the Iranian people,” he asserted.

US misleading UNSC on drone incident

The envoy also protested at the UN Security Council (UNSC)’s keeping the country out of an underway closed-door meeting called by the US to address Iranian forces’ recent downing of an intruding American drone.

“As a country, whose airspace has been violated…, Iran had a right to be present at the meeting,” he said, pointing to the right as Iran’s entitlement under the UN Charter.

The IRGC shot down the American spy drone over the southern Iranian province of Hormozgan on Thursday. The aircraft had ignored the Corps’ repeated warnings.

“Today, the Security Council was briefed unilaterally by the United States [on the incident],” the Iranian official said. He blamed the US for shutting Iran out of the session by misusing its position as a permanent Council member to “mislead Council members in order to further its age-old anti-Iranian policy.”

He reminded that the Council had been provided with “undeniable information” regarding the incident, which showed the aircraft’s exact course and point of entry. Iran’s move to bring down the drone fitted perfectly within the international legal norms and was consistent with the UN Charter’s Article 51, he added.

The US has trespassed on Iran’s skies on numerous occasions, Takht-e Ravanchi reminded, and recalled that the Islamic Republic’s forces had showed “maximum restraint” by sparing a manned American aircraft, which was simultaneously encroaching on the Iranian airspace.

“These are just a number of instances of the US’s provocative and adventurist measures in intruding into Iran’s borders and airspace,” he stated.

He urged that Washington put an end to the adventurism, and reiterated Tehran’s assertion that “we are neither after war, nor want tensions in the Persian Gulf region to increase.”

Both inside and outside the region, however, a certain “circle” is trying to up the tension through dangerous behavior to justify regional militarism and arms sales, Takht-e Ravanchi said.

Those would resort to “deceit and misinformation” to further their ambitions, he added, citing the example of the US’s allegations trying to pin recent attacks on two oil tankers, one Japanese and another Norwegian-owned, in the Sea of Oman on Iran.

Those allegations were spurned even by some of the US’s close allies, Takht-e Ravanchi said. “How can Iran possibly benefit from an attack on a tanker heading for Japan at a time when the country’s prime minister is meeting with the topmost Iranian official during a historical visit?”

He was referring to an underway meeting between Premier Shinzo Abe and Ayatollah Khamenei at the time when the blasts occurred. “There is no funnier allegation” than the one implicating Iran, the official said.

He finally cited the need for genuine dialogue on regional security, asking UN Secretary-General Antonio Guterres to play a role.