Iran President Urges US to Get Back to ‘Normal Conditions’ 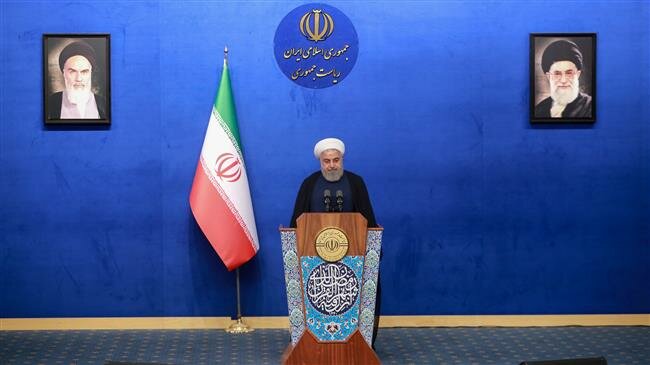 Iranian President Hassan Rouhani says the Islamic Republic can sit at the negotiating table to solve any issues if the enemy returns to "normal conditions" and realizes it had taken a wrong approach.

“The party who left the negotiating table and upended an agreement must come back to normal conditions,” Rouhani said on Sunday, addressing a group of academics and physicians in Tehran.

Otherwise, he added, Iran is left with no choice but to show resistance.

“I declare as the representative of the Iranian nation that in this period, and for as long as the enemy does not regret its measures in the past, we have no way but to show resistance,” he said.

However, Rouhani said, “if the enemy truly realizes it has taken a wrong and incorrect approach, then we can sit at the negotiating table and solve any issues,” he added.

“The enemies sometimes say they have conditions for negotiations with Iran… but in recent weeks they said they have no conditions. They threatened us as if they were a military superpower, but now they say they do not seek a war,” he said, describing the offer of talks with no preconditions as a sign of Iran’s strength.

His comments came shortly after US Secretary of State Mike Pomope backed off from the 12-point list of “basic requirements” he had put forth as a prerequisite for a new deal with Iran, and said on Sunday that Washington was prepared for unconditional talks.

“We are prepared to engage in a conversation with no preconditions. We are ready to sit down with them,” Pompeo said, addressing a news conference in Switzerland.

He; however, added that the United States would continue working to rein in Iran’s “malign activity.”

“The American effort to fundamentally reverse the malign activity of this Islamic Republic, this revolutionary force, is going to continue,” he said.

In response, Iran described the offer as a game of words, and stressed that it expects a change in Washington’s general approach toward the Iranian nation.

“For the Islamic Republic of Iran, a game of words and expressing covert goals under the guise of new words is not a criterion for action, but a change in the United States’ general approach and practical stance toward the Iranian nation is the criterion,” Iranian Foreign Ministry spokesman Seyyed Abbas Moussavi said.

Moussavi added, “The emphasis put by Mr. Pompeo on the need to continue a campaign of maximum pressure on Iran is indicative of persistence of the wrong approach of the past, which needs to be rectified.”

The United States remarkably stoked tensions with Iran in May 2018 when US President Donald Trump pulled his country out of the nuclear accord, officially known as the Joint Comprehensive Plan of Action (JCPOA), and re-imposed harsh sanctions against the Islamic Republic in defiance of global criticisms.

The tensions saw a sharp rise on the first anniversary of Washington’s exit from the deal as the US moved to ratchet up the pressure on Iran by tightening its oil sanctions and building up its military presence in the region.

Washington has since further increased the pressure on Iran, sending military reinforcements, including the USS Abraham Lincoln aircraft carrier strike group, a squadron of B-52 bombers, and a battery of patriot missiles, to the Middle East.

Speaking weeks after the US withdrawal from the JCPOA, Pompeo laid out 12 tough conditions for any “new deal” with Tehran.

The conditions included withdrawal of Iran’s military advisers from Syria, who have been helping the country’s legitimate government in its fight against terrorist outfits, which have been mostly aided and abetted by the US and its Western and regional allies.