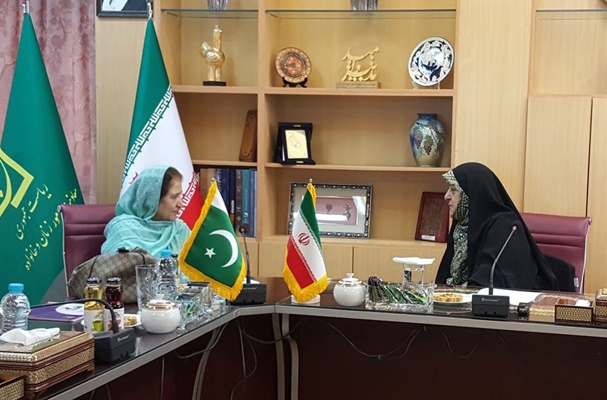 Iranian Vice-President for Women Affairs Massoumeh Ebtekar has held talks with Pakistani Ambassador to Iran Riffat Masood on issues such as expansion of cooperation on women’s affairs and exchange of experiences between the two countries.

During the recent meeting in Tehran, Ebtekar referred to a November 2018 memorandum of understanding proposed by Iran to the Pakistani Ministry of Human Rights which is active in women’s affairs, saying that Tehran is awaiting an answer concerning the beginning of cooperation in the areas mentioned in the memorandum.

She further outlined measures that have been taken in recent years in the field of reform for women’s rights in Iran.

This included supporting female heads of household, women’s employment and entrepreneurship, especially women living in unsafe households, and the prohibition of marriage of girls under the age of 13, as well as organizing courses that promote the growth and development of women, she noted.

She also pointed to the vice presidency’s formation of a National Family and Intergenerational Dialogue Center and said, “We are working toward reducing the generation gap”.”

The vice president emphasized that in Iran’s Sixth Development Plan, gender equity is emphasized to provide equal opportunities in all areas, including health, education, as well as women’s political and economic participation.

She stated, “In Iran, we do not have gender parity in the parliament or elections, but according to the president’s declaration and order issued in 2016, 30% of managerial positions in all provinces and government agencies should be allocated to women.”

“During this time, we have witnessed an increase of 65% in the appointment of women to provincial government posts and 17% in appointments to government bodies.”

She added, “There are many educated girls who enter the job market through programs like start-ups, entrepreneurship courses and academia. Furthermore, there are many immigrants in Iran that receive training and support facilities, and a number of NGOS are active in the field of immigration and support.”

Pakistani Ambassador Riffat Masood, in turn, emphasized the cooperation between the two countries in different sectors and said, “During the Pakistani PM’s visit to Iran and in his meeting with the Iranian minister of health, there was a request to increase Tehran-Islamabad cooperation in this area because in the field of immunology and health, Iran is more advanced than us.”

“Iran and Pakistan can work together in the fields of science, technology and the environment, and it is not necessary to limit the scope of cooperation to hydrocarbons in the context of sanctions,” Masood added.

“We have a gender quota in the area of ​​decision-making in the economic and social spheres, especially regarding seats in the parliament and city councils,” Ms. Masood said, referring to the existence of the National Commission on the Status of Women (NCSW) in Pakistan focusing on women and girls.

At the meeting, the Pakistani ambassador called for a joint meeting in the field of women and entrepreneurship and the exchange of experiences and said, “Using the national experiences of a country such as Iran in the field of girls’ education and their actions especially after the Islamic Revolution would be greatly beneficial and effective.”