A conference on “Islamic Spirituality and the Needs of Humanity Today” was held in Imperial College London on November 17 to commemorate Sheikh Safi al-Din [Ishaq] Ardabili, an Iranian mystic and poet (1252–1334).

Seyyed Hossein Nasr, a professor at the George Washington University who has penned Islam in the Modern World, was a speaker at the get-together which marked the 700th anniversary of Ardabili’s demise.

Ettela’at newspaper filed a report on November 22 on Nasr’s speech at the conference, which convened at the invitation of the London Academy of Iranian Studies (LAIS) and in cooperation with the Muslim Students Association. 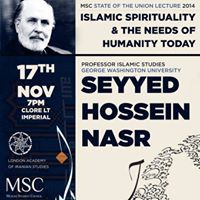 Here comes a partial translation of the speech in which Nasr referred to the Sheikh’s big help to Iranian society and said that Iranians should remain grateful to him for his substantial contribution to Iran’s independence:

Sheikh Safi al-Din immeasurably helped Iran gain independence. He was a mystic who had a central role in building the culture and civilization of the world of Islam. His lofty teachings continue to be used in efforts to build and develop the Islamic civilization and culture.

The Sheikh, who has been a great scholar in Iran and the world of Shiism, was the pioneer of the idea of proximity between Islamic denominations.

What the Sheikh taught was based on the Holy Koran and the traditions of the Household of the Prophet Muhammad (PBUH). Islamic spirituality is the backbone of Islamic art, knowledge and ethics. Islamic mysticism and spirituality is also the pure essence of the Iranian literature.

Attention to the environment makes no sense in the absence of an Islamic spiritual thinking. According to the Islamic thinking, nature, which has been created by God, is animate; thus it is sacred and should be respected. […]

Extremism in the world of Islam which has manifested itself in the horrible acts of terror committed at the hands of the Islamic State of Iraq and the Levant (ISIL) [militants] in Syria and Iraq has been produced jointly by money and ignorance.