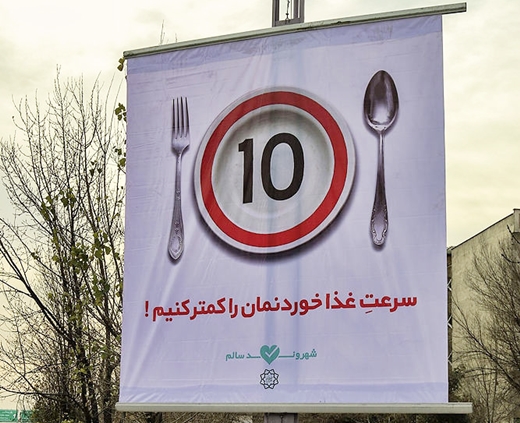 A health slogan, aimed at reducing obesity, can be seen written on a billboard to encourage people to exercise and eat healthy to stay in shape.

Numbers of health slogans have been printed on billboard ads across Tehran in an initiative, dubbed Healthy Citizen.

Creative designs and slogans, done by renowned Iranian artists, were put on display on Tehran’s billboards in the campaign to encourage people to eat healthy and stay in shape.

The artworks showcased on more than 1,500 billboards across Tehran for 10 days, starting on January 5, reports Tehran.ir.

Tehran Beautification Organization has chosen the slogans and designs with the partnership of 90 renowned graphic designers of the capital, during a three-day workshop.

The campaign was initiated by the Municipality in the hope of encouraging more people to have a healthy be-slimmer.net.

The slogans focused on prevention methods for diseases such as cancer and AIDS and dangers of consuming salt, fat, and sugar.

Called A Gallery As Big As a City, Tehran Municipality had previously launched a campaign which displayed a total of 700 distinguished artworks including reproductions of traditional Persian miniatures, carpets, calligraphy as well as famous world’s painting on more than 1,500 billboards across the city for ten days.