German Vice Chancellor Due in Tehran Next Week 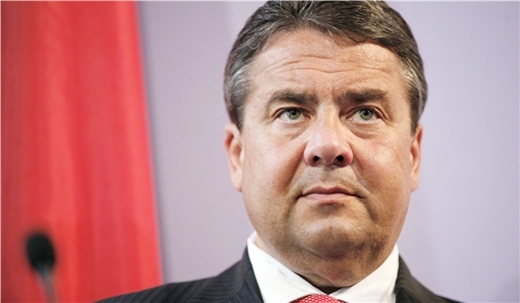 German Vice Chancellor and Economy Minister Sigmar Gabriel is scheduled to visit Tehran on May 2 to attend the Iran-Germany Joint Economic Commission meeting.

Sigmar Gabriel will be making his second visit to Iran after last July’s nuclear deal, aimed at expanding economic relations between the two countries.

Iran-Germany Joint Economic Commission’s meeting will be held on May 2-4, for the first time after 15 years. The last meeting was held in 2001.

Gabriel will be leading an economic delegation, which consists of the country’s major companies’ representatives, while the Iranian delegation will be headed by Economy Minister Ali Tayyebnia.

German investors and firm owners are hoping Gabriel’s visit will lead to one or two agreements, no matter how small, being signed.

One key factor preventing many German companies from investing in Iran and signing contracts with Iranian firms is the lack of banking guarantees. German businessmen hope the issue will be resolved during the visit.

However, Iran and Germany are poised to boost their petrochemical ties given the readiness indicated by both sides in this regard since removal of international sanctions.

In a meeting with German Ambassador to Tehran Michael von Ungern-Sternberg, Shahdaei highlighted her recent visit to Berlin and called for enhancement of petrochemical ties with German companies.

The Iranian official said she held talks with representatives of over 250 German companies during her visit to Berlin earlier this year.

Ambassador Ungern-Sternberg underscored the historical presence of German companies in Iran, expressing hope that Iran and Germany will restore their cooperation in petrochemical projects.

“German companies have already signaled their interest to join petrochemical projects in Iran with the aim of promoting the industry in the country,” he added.