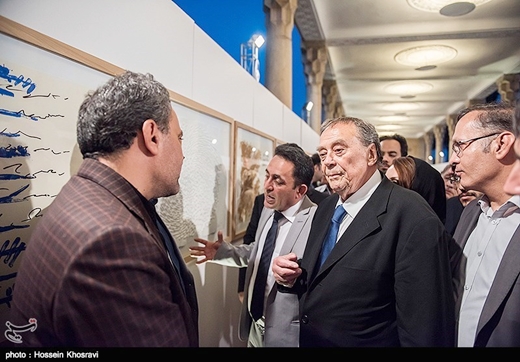 German artist Günther Uecker has opened an exhibition of his paintings in Iran’s Shiraz, all inspired by the sonnets of great Iranian poet, Hafez.

Entitled “Tribute to Hafez”, the paintings were unveiled at the poet’s mausoleum in Shiraz, but they are going to be transferred to an art gallery in Shiraz.

“The paintings are inspired by the sonnets of Hafez, and will be displayed to show the artist’s two-year project on works inspired by Hafez,” Tehran Times quoted the director of Iran’s Office for Visual Arts, Majid Mollanoruzi, as saying at a press conference on April 28.

The 82-year-old Uecker is a member of the ZERO movement; best known for his signature use of nails arranged into tactile, sculptural paintings.

His works can be seen in collections and at large fairs around the world.