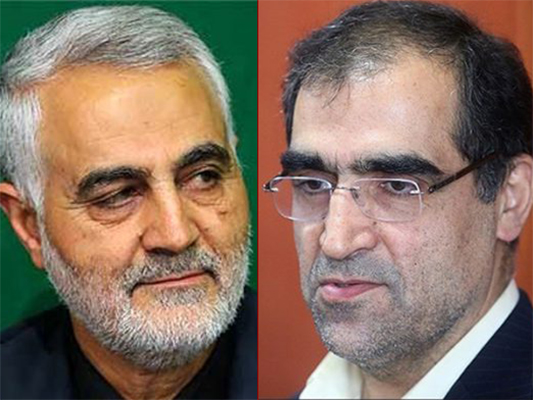 The IRGC Quds Force Commander in a letter to Iran’s minister of health appreciated the ministry’s efforts to provide medical assistance for the fighters of the resistance front.

The Commander of the Quds Force of Iran’s Islamic Revolution Guards Corps (IRGC), Major General Qassem Soleimani, in a letter on Friday (April 28) expressed his gratitude towards the staff of the Ministry of Health and Medical Education for their efforts to provide the fighters of the resistance front with medical assistance.

In his letter to the health minister, Soleimani wrote, “I sincerely appreciate your genuine efforts and those of the staff of the Ministry of Health and Medical Education who are involved in the fields of promoting education, production of pharmaceuticals and medical equipment and, particularly, providing injured fighters [of Islam] with medical assistance and treatment. It is crystal clear that God witnesses your efforts and endeavours in the Islamic resistance fronts and will reward you duly.”

In his response to Soleimani’s letter of appreciation, Iranian Health Minister Seyyed Hassan Qazizadeh Hashemi, said, “Serving those who jeopardize or sacrifice their lives to ensure other people’s security is an honour.”

According to a Farsi report by IRNA, Qazizadeh Hashemi added in his letter, “The honourable people of Iran will never forget the sacrifices made for ensuring security of their country. Serving those who risk or sacrifice their lives to ensure the security and health of other people is a great honour. We are required to be grateful to those honourable men.”

He said they have made a deal with God and only supplicate the Almighty for their reward.

Qazizadeh Hashemi stressed that, “Today that I am writing these sentences in response to that honourable major general, I have learnt that one of the lionhearted nurses of our homeland, who had been captured by Takfiri groups while serving the decent defenders of the holy shrines of the household of prophet Muhammad, has been freed from the grip of the enemies and returned home.”