Future of Tehran-Washington Relations Influenced by the Past: Rafsanjani 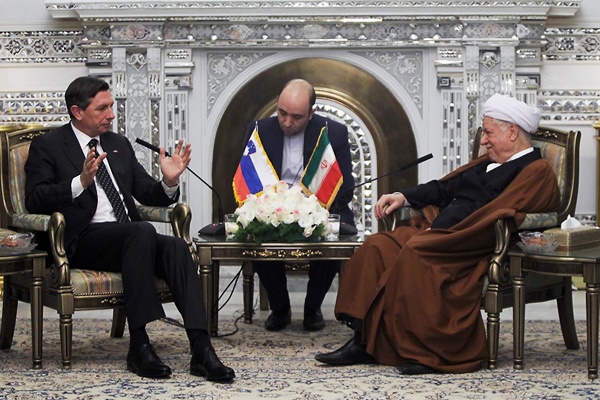 Former Iranian president Ayatollah Hashemi Rafsanjani says Tehran has never cut its diplomatic ties with the US, and has always shown goodwill despite the US pressure.

Ayatollah Rafsanjani is one of most important figures in the Islamic Revolution, known for his pragmatism and moderation, as well as his support for free market economy and Iran`s relationship with west.

These characteristics might be what motivated the Slovenian President to evaluate his loyalty by posing a question that can be considered “the criterion for commitment to 1979 Islamic Revolution`s principles and values.”

“How do you see the future of Iran-US relationship?” Pahor asked.

In his answer, Ayatollah Rafsanjani, this experienced politician, referred to the past to illuminate the path of future.

Here are his remarks as published in his official website and translated by IFP:

“We didn`t cut our ties with the US even after the 1979 Islamic Revolution. About 5,000 American advisors left our airports with their families and furniture in full security,” he said about whether Tehran and Washington will resume their relations.

“The US was due to equip Iran with modern military materials and received the money, but failed to do it, and has been indebted to Iran for many years,” he noted, referring to Washington`s deceitfulness since the time of former Shah of Iran.

“In all these years after the Revolution, Iran has been faced with Washington’s harsh positions and sanctions, but it has always behaved in an honourable and wise way and showed its goodwill,” Hashemi Rafsanjani stated about Donald Trump`s harsh attitude towards Iran in 2016 presidential election`s campaign.

Ayatollah Rafsanjani went on to say that the nuclear deal (JCPOA) is an international convention. “If we are to agree with Trump, we should deny NATO, the World Trade Organisation and Paris Agreement about climate change, too!”