Foreign meddling in Syria must stop 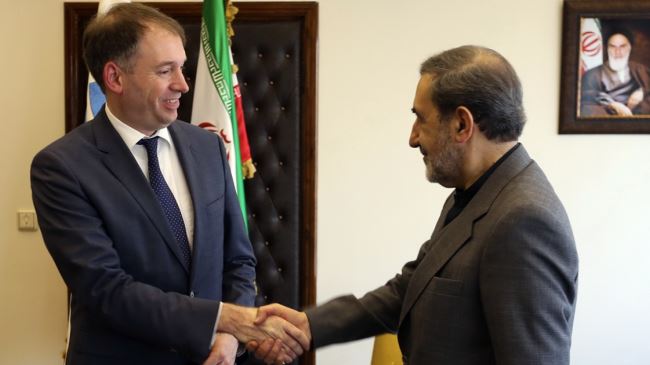 Ali Akbar Velayati, an advisor to the Supreme Leader, says that foreign interference is mainly to blame for the lack of stability and sustainable peace in Syria.

A senior advisor to Leader of the Islamic Revolution Ayatollah Seyyed Ali Khamenei says foreign meddling in Syria must stop as a major step toward restoration of peace in the war-stricken country.

“Foreign interference is the most significant reason behind the lack of stability and… sustainable peace in Syria,” Ali Akbar Velayati said in a meeting with Niels Annen, the spokesman on foreign policy affairs for the German Social Democratic Party (SPD), in Tehran on Sunday.

Velayati said foreign militants wreaking havoc in Syria must leave the country as “the first step” toward peace and stability so that later measures can be taken to reach “proper solutions based on the public will” to the ongoing crisis in the country.

“The issue of ISIL and Syria are among the most important [issues] of concern which not only affect the region but the world,” Velayati, who is also the president of the Center for Strategic Research of Iran’s Expediency Council, said.

The Iranian official added that influential and powerful countries should strengthen cooperation to establish stability in the Middle East and across the world.

Iran has made utmost use of its capabilities to counter terrorism and would take necessary measures in the anti-terror fight, Velayati pointed out.

The ISIL terrorists control some parts of Syria and Iraq. They are engaged in crimes against humanity in areas under their control. ISIL militants have terrorized and killed people of all communities, including Shiites, Sunnis, Kurds, and Christians.

The German politician, for his part, said Iran and Germany share common concerns, particularly on regional issues including ISIL, Syria and Iraq.

He pointed to the two countries’ good relations and added that exchange of visits between Iranian and German officials would improve ties at all levels.