Doors of UK Embassy in Tehran Open for Show-Off, Close for Serious Issues 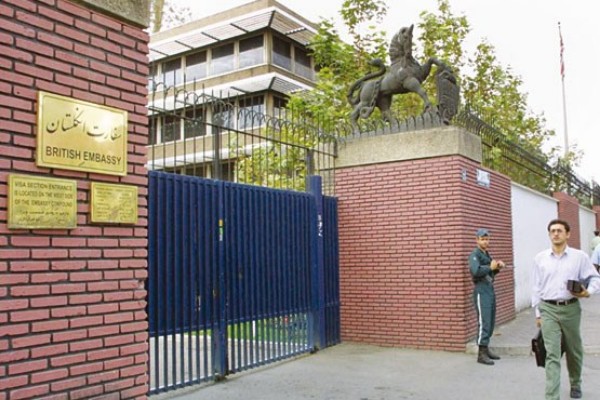 The wall built around the UK embassy in Tehran becomes high and the door turns into a concreted hurdle when it comes to serious issues, a media report says.

The British diplomat who was briefly arrested in a recent nighttime party in an upscale neighbourhood in Tehran is the UK embassy’s economic attache.

The British diplomat, Phoebe Evans, was arrested along with a Dutch diplomat who was a staff member of the Dutch embassy.

Moreover, alcoholic beverages and narcotics were seized at the party which was also attended by a considerable number of stars of stage and screen, reported Tasnim News Agency.

Now, the question is whether or not foreign diplomats, including the British diplomat and the UK embassy, had any role in organizing the party.

Probably the UK official was expected to be seeking an economic solution and ease trade transactions between the two countries in the sixty days that Iran has given the remaining signatories to the Iran nuclear deal to stay in the agreement.

However, information obtained by Tasnim shows the British embassy in Tehran, especially its commercial department, has not helped Iranian economic players in most domains, especially in the oil sector. It has not got involved in these areas, and has only given some promises with regards to the medicine and food area. And that move could probably be an alleged humanitarian favour that UK officials can show off in media. This comes as the UK is on board with the US when it comes to anti-Iran sanctions.

The fact that British diplomats take part in fast-breaking feasts just to show off, or participate in events such as the party mentioned above, shows they lack the determination to settle Britain’s economic problems with Iran. It shows the British embassy in Tehran has other priorities.

Following the United States’ withdrawal from the Iran nuclear deal and the Europeans’ failure to live up to their economic commitments under the agreement, Iran and its people’s key concern has been economic issues. Nevertheless, it seems that the embassies of countries such as Britain are launching charm offensives by holding ceremonies like fast-breaking feasts instead of turning to the main issue.

In reaction to criticism of the controversial fast-breaking ceremony recently held by the UK embassy in Tehran, British Ambassador to Iran Rob Macaire wrote in a tweet on May 13 that holding fast-breaking feasts is “a sign of respect for Islam.”

Now, the question is whether the presence of that female British diplomat at the Tehran party was in line with respect for Islam or not.

The British ambassador had also said in a video on April 19 that doors of embassies should be open.

This is a good and interesting sentence. But it begs the question of whether the British embassy leaves its door open only for ceremonial fast-breaking feasts and parties, and why these doors are closed to economic players. The wall that the British ambassador refers to in the same video is, in fact, a wall that they themselves have built in Tehran-London relations, namely in the economic domain.

This door and wall opens whenever the British embassy wants to draw the attention of people from the domain of politics, culture and arts, etc.,

with a ceremonial fast-breaking event or party or other methods. However, the wall becomes so high and the door turns into a concreted hurdle when it comes to serious issues.

The British embassy, which claims to have held fast-breaking reception out of respect for Islam, had also better explain why the UK’s flag carrier British Airways left Iran before the US pullout from the Iran nuclear deal despite the fact that its presence in Iran was economically viable for the airline, and why British officials are not interested to cooperate with Iran in economic domains.