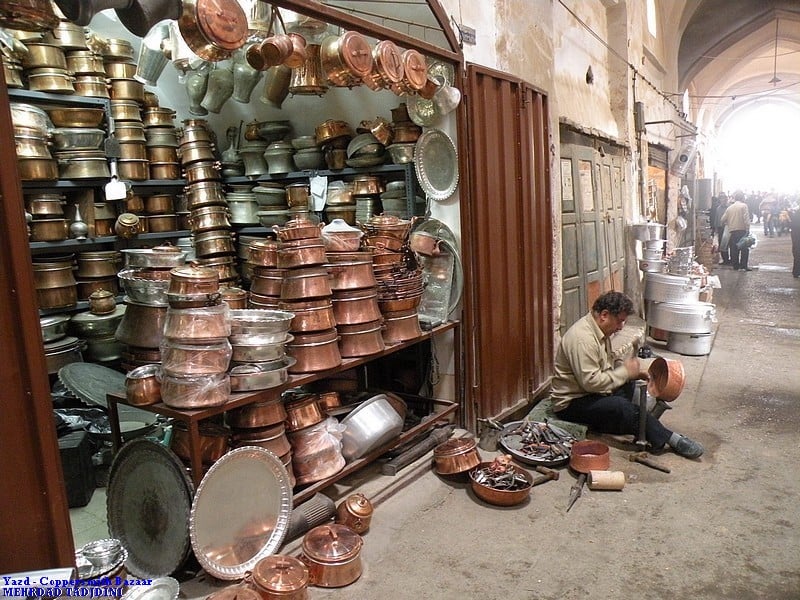 The Coppersmiths’ Bazaar in the city of Yazd in central Iran has remained the hub of copperware trade and services after half a dozen centuries.

As coppersmiths had a booming business in the past, a market named after them opened in Yazd 600 years ago. The bazaar was a place where copperware was made, bought and sold.

The market has a dome-shaped ceiling with white plaster walls. Of course, the floor of the bazaar, which has been registered on the list of Iran’s National Monuments, has been covered with cobblestones in recent years through the good offices of the cultural heritage authority.

At the moment, all services related to coppersmiths’ business, including selling and repairing copperware, are offered in the bazaar, ISNA reported.

The use of copperware was more common in the past, so much so that it was customary in the past to include copperware in girls’ dowries when they got married and went to live with their husbands under one roof. Most of the cooking was done in copper dishes. Even copper trays were used to entertain guests.

In those days, water jars, bread baskets, sugar pots, bowls, etc. were all made of copper; however, as time went by and dishes made of fluoropolymer (Teflon), cast iron, etc. became all the rage, the use of copperware began to fade away.

Of course, it has been several years that people are turning to copperware again, which has revitalized coppersmiths’ business in Yazd.

What follows are photos of the bazaar retrieved from various sources: