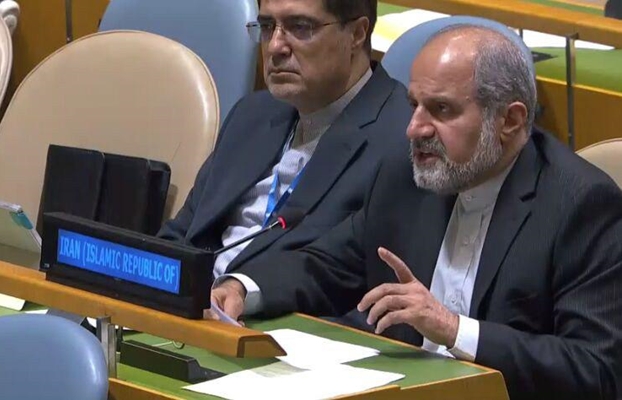 Iran says the Al Saud regime poses a threat to peace and security, and has turned the territory of Saudi Arabia into a source of extremism and terrorism.

Iran’s Deputy Ambassador to the United Nations Es’haq Al-e Habib accused Saudi Arabia of using Iran as a pretext to deflect attention from its wrong moves.

“Saudi Arabia has once again used the Iran card to hide its own regressive nature and doomed, continuous adventurism,” he noted, reacting to Riyadh’s recent anti-Iran allegations.

The comments came in response to Saudi Foreign Minister Ibrahim Abdulaziz al-Assaf’s Friday remarks in the 74th session of the United Nations General Assembly. Assaf leveled terrorism charges against Iran and called for added financial pressure on the country.

The Iranian diplomat then blamed Riyadh for its aggression against Yemen.

“It is Saudi Arabia, not Iran, that has committed all-out war crimes against its poorest neighbour,” he said.

He then denounced Saudi Arabia for supporting former Iraqi dictator Saddam Hussein during the eight-year Iraqi imposed war on Iran in the 1980s.

He also pointed the finger at Saudi Arabia for backing terrorists.

“At a time when the Iranians were fighting al-Qaeda and other terrorist groups in Afghanistan, it was Saudi Arabia that lavishly supplied them with cash and arms,” he said.

“It was Saudi Arabia, and not Iran, that sent billions of dollars’ worth of weapons and ammunition to the ISIS and its affiliated terrorists in Syria, most of whom were Saudi citizens,” said the Iranian diplomat.

“It is not Iran that bribes foreign politicians to promote sectarianism and support its deeply corrupt system, and more ruthless, [it is not Iran] that has played a role in silencing all democratic movements in our region,” he said.

“With their renaissance-like ideology coupled with corruption, tyranny and trillions of dollars’ worth of modern weapons, the Saudis pose a disastrous threat to regional and international peace and security,” he said.

He called on the international community to put an end to the Saudi abuse and ridiculing of international circles, namely the UN, in order to ward off a future disaster before it is too late.