A push to end war: Have Russia and the US struck a secret deal over Syria? 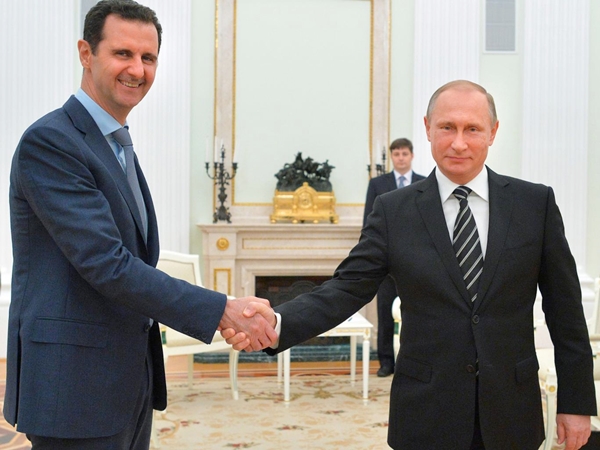 An Afghan analyst has said that a decision by the US and Russia to deconflict any overlapping airstrikes in Syria indicates that the two sides may have reached an agreement over the future of Syria.

An Afghan political analyst says there is every indication that Russia and the US have agreed on a diplomatic solution to the Syrian crisis and on the fate of President Assad.

Etemaad daily on October 22 published an opinion piece by Pir-Mohammad Molazehi, an expert in Indian Subcontinent Affairs, on the reasons behind Syrian President Bashar Assad’s surprise trip to Moscow and a likely secret agreement between the two powers over the future of Syria. The following is the translation of the piece:

Bashar Assad pursued two key objectives during his trip to Russia. First, he left his country for the first time in five years [since protest rallies erupted in his country in March 2011], and this indicates that he has gained more self-confidence back home, especially because Russia’s military intervention in Syria has built up his self-confidence.

Second, Assad was gravely concerned about talks between Russia and the United States, because it seems likely that the two sides have reached an agreement on [the future of] Syria [The Memorandum of Mutual Understanding between the Defense Ministries of Russia and the United States on preventing incidents and providing for aviation flights during operations in Syria], especially after the question of deconfliction [reducing the risk of collision between (aircraft, airborne weaponry, etc.) in an area by coordinating their movements] came up for discussion and the two sides agreed to prevent overlapping air campaigns.

Russia seems to be gradually embarking on cutting a deal with the United States, there is no strong evidence to prove it, though. But recent remarks by Turkish officials – that they have bought into the notion of Assad remaining in power for a six-month period – show that an agreement is being made; this has raised concerns in the top ranks of the Syrian government, Assad included.

All the indications are that Assad will be removed from office but the Ba’ath Party will remain in power. In doing so, the Ba’ath Party can form a broad-based government and Assad’s successor too will be chosen in a peaceful fashion.

On top of that, ISIL is the common enemy of all warring parties in Syria. Russia and the US see eye to eye as far as the elimination of ISIL is concerned. The situation in Iraq is similar to that of Syria. Moderate groups will be gradually incorporated in power, especially because Russia seems to have accepted the Free Syrian Army as part of the future solution to the Syrian crisis.

On the other hand, when the Russians seek to enter into negotiations, they try to have the high ground [one way or another] so that they can hold the whip hand in the negotiations. With Assad in Moscow, Putin was seeking to show that all US plans in Syria had ended in failure and that Russia had managed to keep Assad in power.

Nonetheless, the fact remains that parties to the negotiations [Russia and the US] have come to the conclusion that there is no way out for Syria but a diplomatic solution.

The other day, a group in Syria’s Kurdistan region [Rojava or Western Kurdistan is a de facto autonomous region in northern Syria] announced that it will create a Kurdish region [in the country]. Ground realities show that Syria is on the brink of disintegration, but that the US, Russia and even Turkey do not want this to happen.

Besides, another danger lies around the corner: Syria’s breakup seems to be on course to creating two predominantly Shiite and Sunni regions as well. If the Americans and Russians fail to arrive at an agreement, Syria will practically teeter on the brink of disintegration. That would pose more grave threats to the region, including Turkey.

There are signs that talks have been held on Syria behind closed doors and agreements have been arrived at. Announcements that the Americans and Russians have signed a deconfliction deal [on air safety over Syria or as the Russian Defense Ministry put it “preventing incidents between the air forces of Russia and the US”] and that provisions of such a deal are confidential reveal that issues other than air safety have been discussed.

As a matter of fact, talks have been held so that the two sides can work out a definite solution. The two sides have realized the existing threats in Syria. One misstep could trigger a universal war as enormous as a world war [both in size and strength].