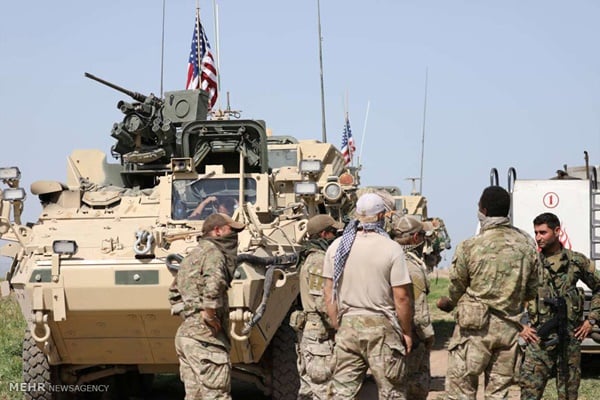 The United States has three military bases near Manbij, which shows how important the Syrian city is to Washington, but that has complicated the city’s fate, a media report says.

Still many people ask what US President Donald Trump’s recent tweet was all about. Is the US really going to withdraw from Syria gradually, or is it Trump that will retreat in the face of neocons? It seems the answer should be sought in Manbij.

After the announcement that US troops would pull out of Syria, “domination over Manbij” became the major arena of rivalry between Damascus and anti-government forces.

The Tasnim News Agency has, in an exclusive report, elaborated on the importance and strategic aspects of Manbij located in the northeast of Aleppo Governorate in northern Syria, 30 kilometers west of the Euphrates. The report specifically looks at the United States’ role in the case.

To begin with, two issues need to be discussed: the number of US forces on the ground in Manbij and differences between Syrian and White House authorities over Manbij. First, let’s turn to the US military’s bases on the outskirts of Manbij.

Three US Bases in North, Northwest and West of Manbij

The United States, which played a key role in an operation where the Syrian Democratic Forces (SDF) secured domination over Manbij, has set up three bases in this region. During the SDF’s operation to liberate Manbij, the US and the ISIS terrorist group reached an agreement whereby the remaining terrorists in Manbij would leave the city and move towards the city of al-Bab in civilian vehicles, so that troops would sustain fewer losses while capturing Manbij. So, from the very early days, Washington’s most important concern in this region was ISIS terrorists’ possible attacks, which were predicted to be launched from al-Bab (located to the west of Manbij and on the path to Aleppo) or the city of Jarabulus (north of Manbij). Accordingly, the Pentagon established three bases in this region.

The United States’ most important military base is located five kilometres west of Manbij and is tasked with ensuring the security of the city. The well-equipped base located next to Al-Etihad University is called “al-Sa’eidah” named after a village which lies less than two kilometres northwest of the base.

It is hard to estimate the number of the American forces stationed there. However, some reports suggest around 500 to 1,000 US troops are present there, which shows the importance of this base in top Pentagon commanders’ equations with regards to Syria.

The United States’ second largest military base in this region is called “Al-Assaliyeh” located north of a village with the same name. The military base lies on the road from Manbij to the border town of al-Rai and is mostly used for training purposes. The Al-Assaliyeh village has a population of around 1,000 people. It is a Kurdish-majority village. Currently, YPG militiamen have a training base north of the village a few hundred metres from the US military base there.

Only a few images of the Al-Assaliyeh base have been published, which show it is very important for the SDF and the United States security-wise. Al-Assaliyeh lies less than 5 kilometres from the Euphrates region. Some experts believe the United States’ maintains modern espionage and monitoring equipment at this base. Also, images and evidence suggest YPG fighters receive advanced military training at the YPG’s base there.

The United States’ third largest military base in Manbij is “Awn al-Dadat.” It borders the Euphrates region and lies on the southern bank of the Sajur river. The northern banks of the river are under the control of the Turkish army and its mercenaries in the Free Syrian Army, and is regarded as part of the Euphrates region.

Mercenaries in North of Maqsoomah Village

The Awn al-Dadat base is located between the villages of al-Dadat (inhabited by Arabs) and Bawzkij (inhabited by Turkmens) to south of the Sajur river. Turkey has recently set up a base there on heights. What is noteworthy is that the Free Syrian Army and Kurdish militiamen have been stationed in the region over the past two weeks. Take Maqsoomeh village, for example. It is divided into two northern and southern parts. In the recent week, Free Syrian Army forces have set up a camp in the northern part of the village and YPG forces have been stationed in the south.

A Syrian analyst has weighed in on the significance of Manbij. He says anyone who captures the city sooner will be the one who will seize most parts of the region east of the Euphrates. It goes without saying that Manbij has strategic importance, and that is why Ankara has been in a hurry to seize the city and adopted preemptive measures to occupy Manbij before others. In fact, Manbij is geopolitically important. Moreover, it has been a place where important events have unfolded in the Syria crisis. The importance of Manbij has redoubled especially after Trump officially ordered the withdrawal of US troops from Syria. This comes as Turkey has serious plans to launch an imminent operation in the east of the Euphrates river.

On the whole, more than one thousand American forces with state-of-the-art equipment and armoured units are stationed at the three bases in the suburbs of Manbij. This has urged the military commanders in Syria to play a role in determining the fate of Manbij region, which has further complicated the situation of the city.